Months of preparation and here we have it: the awaited ‘Fit for 55’ package from the European Commission that aims to revise different pieces of legislation to deliver on the new EU climate target of at least 55% net  emissions reduction by 2030. Yet, is it enough?

The most comprehensive update of EU climate and energy policy that the Commission has ever presented on a single day came out just days before many regions in central Europe woke up to unprecedented flooding. The scientific community and climate experts and organisations are asking for moving faster and for more climate ambition  -and disastrous events remind us all that we need to act much quicker and bolder than we have done until now in Europe and around the globe.

So let’s take a first, closer look at the main proposed pieces of legislation. For more background information on the package , check our `Fit for 55’ briefing posted ahead of the release of the legislative package 14 July 2021.

While the Commission’s proposals foresee a small increase beyond the agreed at least 55% net emission reduction in 2030, overall they leave a substantial gap to what is needed. CAN Europe issued a reaction acknowledging this massive piece of work attempting to tackle dangerous climate change, yet warning that the overall level of ambition needs to be increased for the EU to fulfil its commitment under the Paris Agreement to limit global temperature rise to 1.5°C.

It’s now up to Member States’ and the European Parliament to improve the different pieces of legislation and enable the EU to overshoot the 55% emission reduction target towards -65%. Only with further ambition will the package be turned into a policy framework that will bring us all to the 1.5°C target. 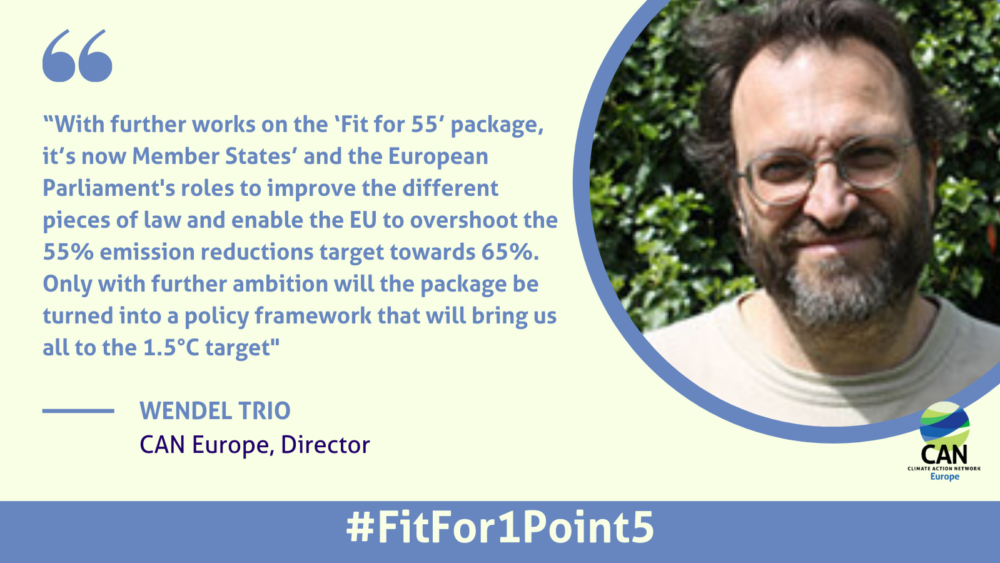 The Effort Sharing Regulation (ESR) sets binding emission reduction targets for EU member states. It covers (mainly) the road transport, buildings, agriculture and waste sectors. The Commission’s proposal  keeps the scope of the ESR and suggests increasing the overall EU emission reductions target from  30% to 40% by 2030 (compared to 2005 levels.) CAN Europe  very much agrees that Member States remain responsible for delivering the emission reductions in all ESR sectors, and step-up their efforts. However, the ambition level included in the reviewed ESR is still far from being aligned with the Paris Agreement goal – for which overall 50% emission cuts would be needed in these sectors.

Furthermore, these emission reductions are weakened by loopholes and so called flexibilities (banking, borrowing, trading of emission allowances and using ETS and LULUCF credits to offset reductions in ESR.) The Commission now adds a new mechanism in the form of an additional LULUCF reserve. CAN Europe calls for removing these loopholes to strengthen the regulation and make sure emission reductions are happening as effectively and fast as possible in all EU countries. 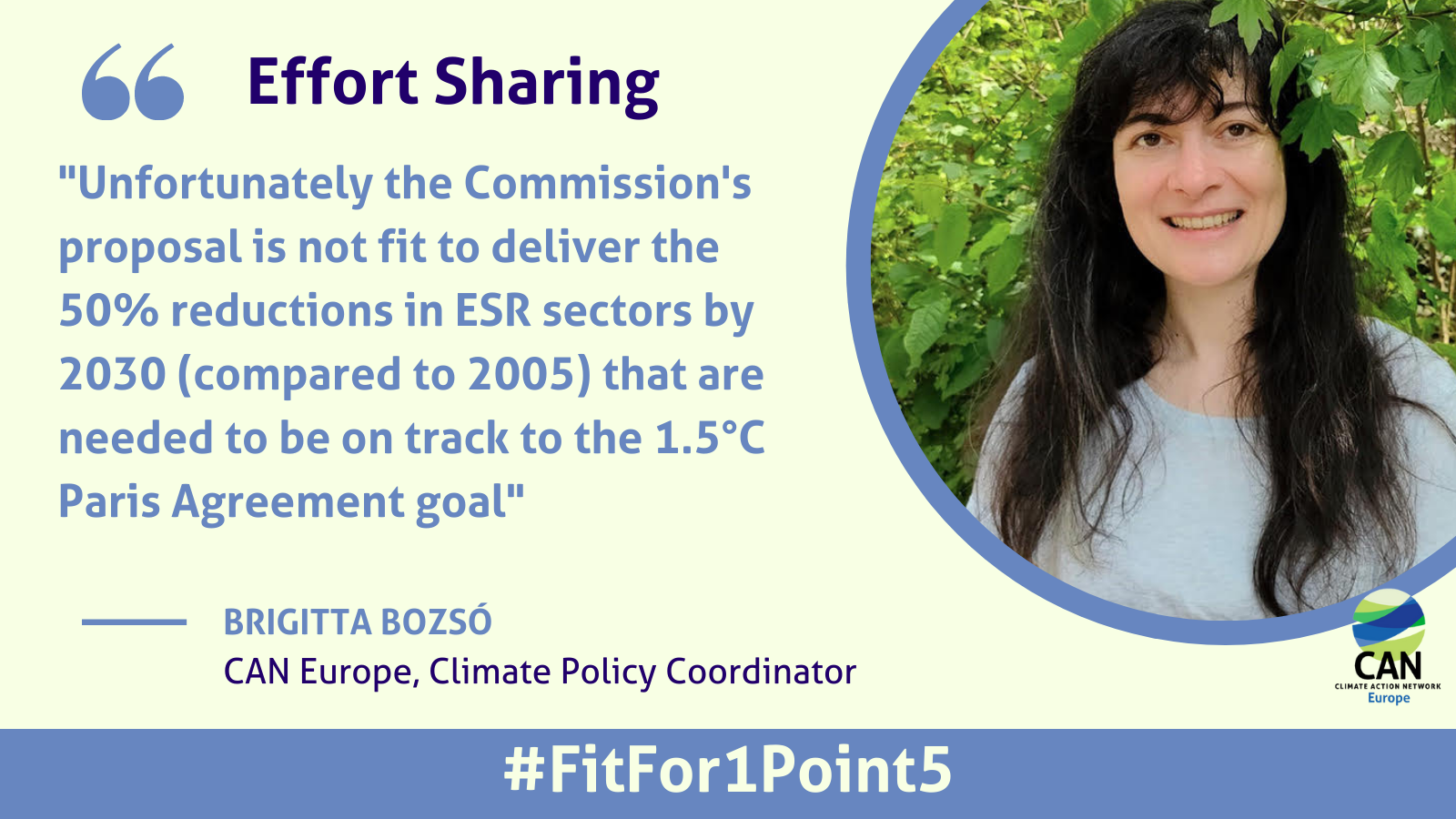 The Commission has proposed a substantial overhaul of the EU Emissions Trading System (ETS), the EU’s carbon market. First, to update the ambition so that more emission reductions are delivered, the Commission has proposed increasing the ETS 2030 target from currently -43% to -61% emission cuts (compared to 2005 levels,) adjusting the annual rate at which the overall cap for emission allowance decreases, rebasing the cap by a still to be determined amount of allowances to bring it closer to real emission levels and reviewing the market stability reserve which serves as a tool to control liquidity of the market.

Second, the scope of the EU carbon market is strengthened: shipping emissions, domestic and international, are now included in the ETS and need to buy allowances at auction as of 2026. Unfortunately, the ETS will still not apply to international aviation.

The biggest disappointment of the proposal is the lack of action against the hand out of free pollution permits to industry. Even worse, in combination with the Carbon Border Adjustment Mechanism (CBAM), heavy industry could still get to free-ride until 2035! A positive change is on how revenue generated by the ETS should be used. According to the Commission proposal, Member States have to spend all their auctioning revenue on climate-related purposes, while the Modernisation Fund will no longer allow any fossil fuel investments. Yet, transparency and scrutiny of Member States’ reporting on revenue use urgently needs to improve. 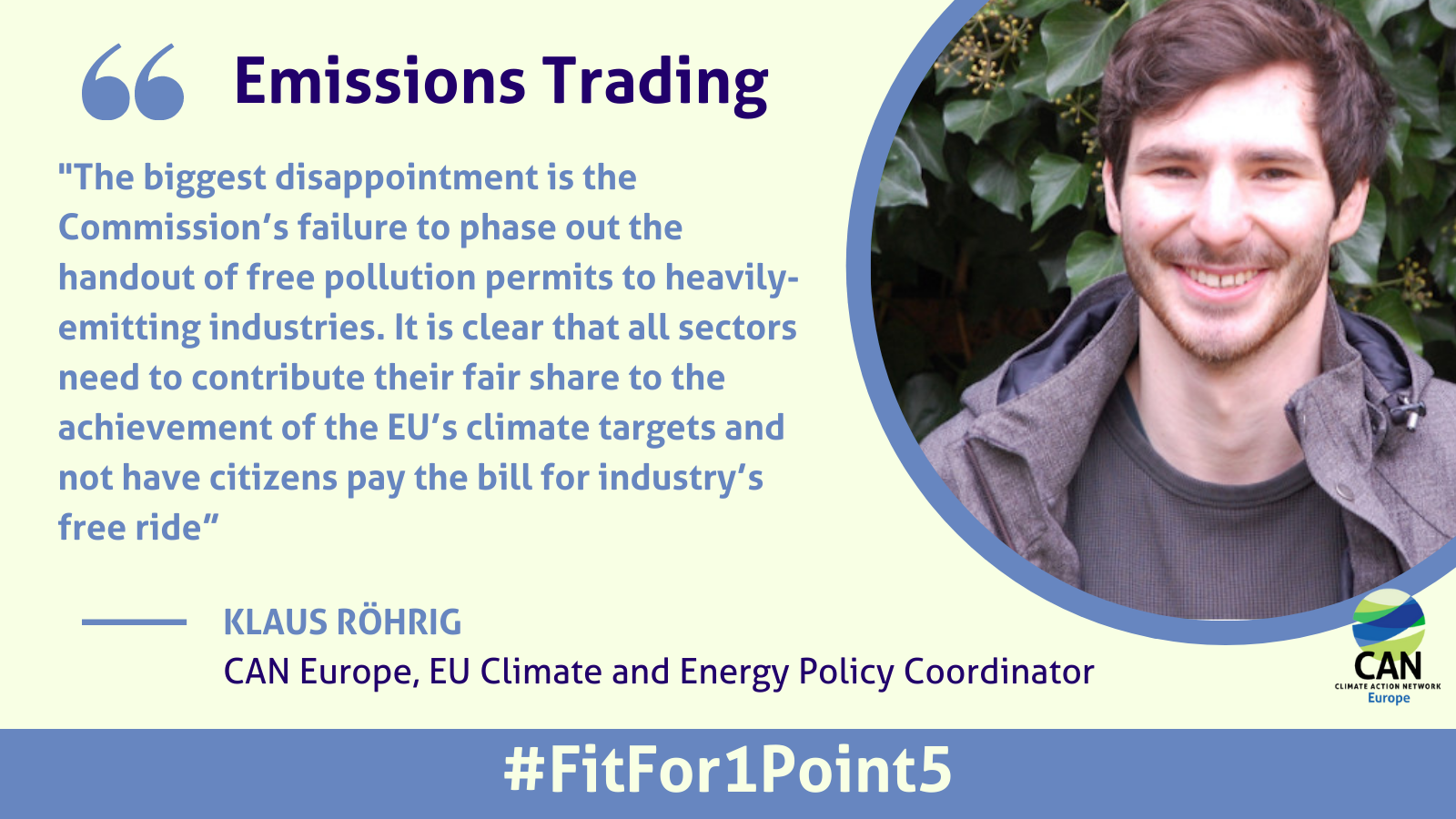 The ETS proposal also establishes a new, separate ETS for road transport and building emissions, sectors which however remain under the scope of the Effort Sharing Regulation. This new separate ETS is to be operational under full auctioning from 2026 onwards. The system would tackle combustion fuel suppliers, but those are expected to pass the costs through to consumers, increasing the costs of fossil-powered transport and heating and cooling in the medium-term. This raises concerns about social impacts on those most vulnerable, which need to be addressed by adequate support schemes. Relevant regulatory measures will always be needed to help tackle non-market barriers to the wider deployment of clean energy solutions.

While applying the Polluter Pays Principle is essential, it is outrageous that the Commission proposes to keep granting heavy industrial polluters free emission permits when citizens across the EU will possibly face higher transport and heating costs . In this regard, the Commission ETS proposal fails to ensure a fair contribution of all sectors. 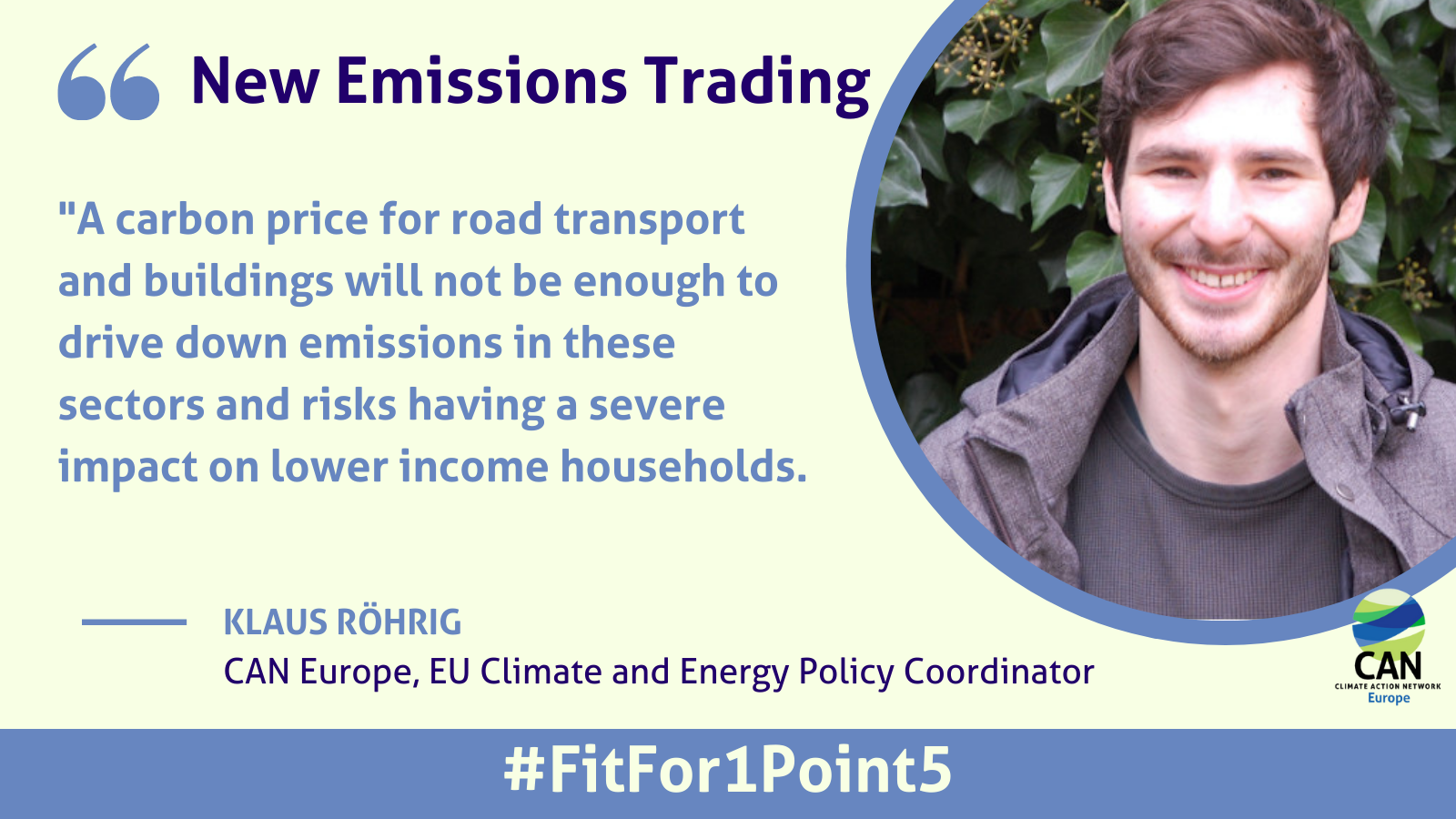 LAND USE, LAND USE CHANGE AND FORESTRY (LULUCF)

The LULUCF Regulation aims to tackle the carbon flows on the EU’s forests and land. Across the EU, the lands under LULUCF as a whole remain a net sink, currently (2019) removing -265 million tonnes of CO2 annually. The carbon sink has been decreasing in the last few years significantly and under the current policy the sink was allowed to further decrease.
With this proposal, the Commission aims to increase the EU’s LULUCF sink to -310 Mt by 2030 -only a minor increase to what it is today and far from what scientific analysis assess as an ecologically viable sink potential for 2030 (-600Mt).

Contrary to what CAN Europe has asked, the land sink will contribute toward the EU’s overall net target (within the limits of the European Climate Law). Furthermore, the Commission proposes, as of 2031, to create an Agriculture, Forestry and Other Land Use (AFOLU) sector combining non-CO2 emissions from agriculture with LULUCF, aiming for sectoral net zero in 2035 and net negative thereafter.

Moving away from the current “forest reference levels” accounting system to an explicit target in 2030 is a very positive change that increases clarity and transparency. For the period of 2026-2030, Member States will have national targets and will need to comply with a linear trajectory. Emissions from wetlands are accounted for only from 2026 onwards. This is a wasted opportunity to tackle that significant emissions source. 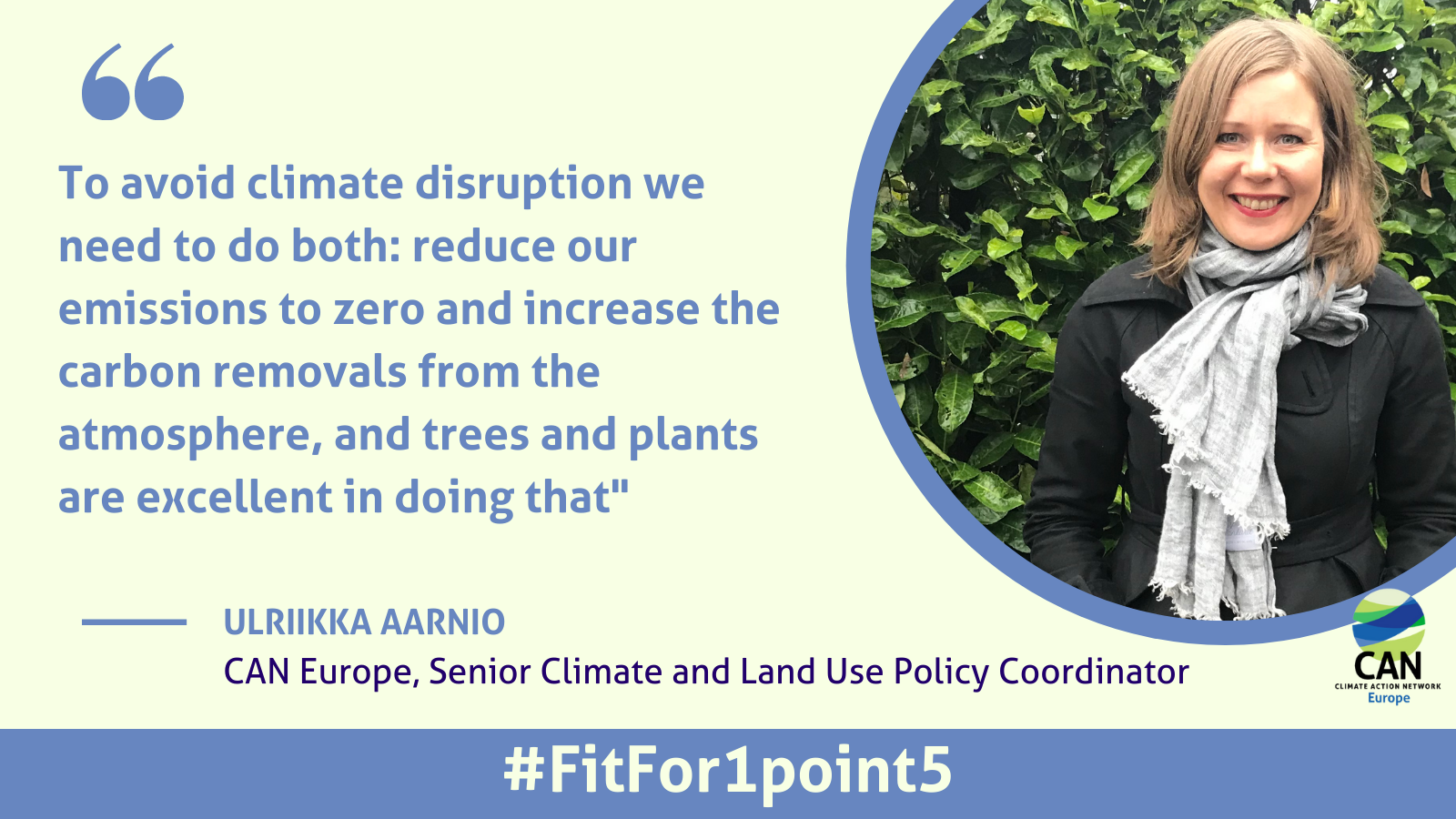 The Renewable Energy Directive (RED) aims to promote energy from renewable sources. The proposal to amend the RED increases the overall renewable energy share from at least 32 % to at least 40% by 2030. However, as action in the next ten years will be decisive in reaching the 1.5°C objective, the revised RED should propose an EU binding renewable energy target of at least 50% by 2030.

The RED revision does not reintroduce binding national targets, which would provide certainty and push governments to bolder climate action. Furthermore, even though no fundamental changes are proposed on permit granting and administrative procedures, according to a new provision the Commission will review these procedures one year after the entry into force of the Directive. This is a positive development, but the date or the review might come too late. Moreover, the review should also look into ensuring that citizens and communities are engaged in the energy transition. With a cross-cutting approach, it also needs to be ensured that the increased use of renewable energy potentials really mobilises synergies with biodiversity protection.

The proposal also tries to incentivise system integration of renewable electricity. Despite some positive additions, there is a too narrow focus on the transport sector. A general approach to foster the direct use of renewable electricity in heating and cooling and in industry is missing. The proposed provisions on hydrogen currently promote hydrogen produced with renewable electricity and not with fossil fuels (if the upcoming Delegated Act confirms this principle.) However, provisions that already exist in the current RED and leave the door open to fossil based fuels (e.g. so-called ‘recycled carbon fuels’) have not been deleted. Finally, even though some changes are being proposed, the bioenergy criteria are not sufficiently strengthened. 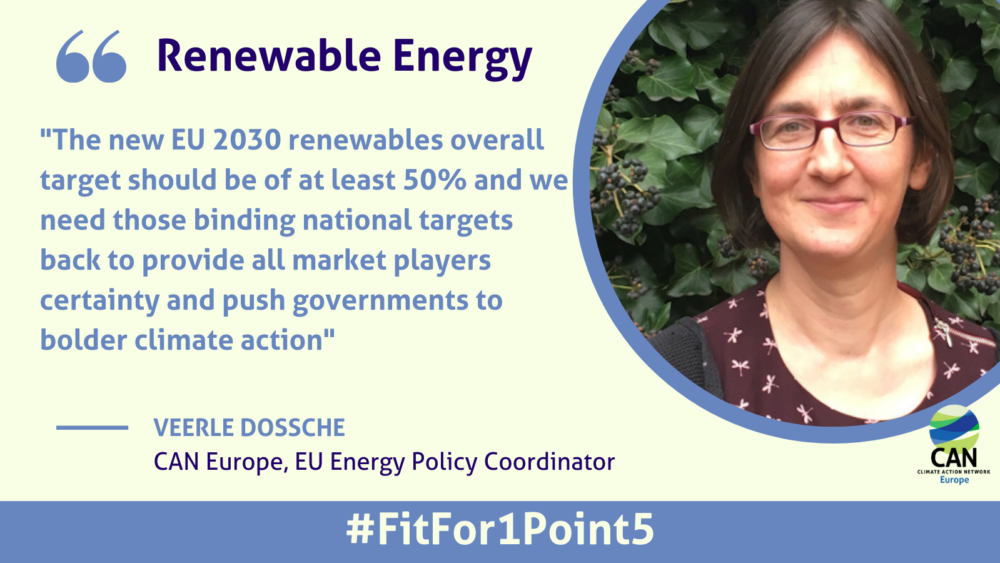 This level of ambition is in line with the 55% GHG-emission reduction target for 2030 but not enough to help the EU get in line with 1.5°C goal. CAN Europe calls for an EU binding energy efficiency target of 45%. Furthermore, the proposal does not include national binding targets. However, it introduces a delivery mechanism in case there is insufficient progress to achieve the national contributions, which is similar to the Renewable Energy Directive. This is an improvement compared to the current situation where no corrective action is foreseen.

In terms of measures, the proposal foresees a higher annual savings rate of 1,5% for the Energy Savings Obligation from 2024 onwards and more stringent provisions for the renovation of buildings owned by public bodies. Furthermore, there is a new obligation for reducing the energy demand in the public sector by at least 1,7% annually and new rules that are relevant to tackling energy poverty are set. A new overarching provision introduces a stronger legal basis for the implementation of Energy Efficiency First principle.

Finally, the heating and cooling provisions related to planning, highly efficient cogeneration and efficient district heating are updated. Unfortunately, they still fail to trigger a quick and extensive shift away from fossil fuels and towards an energy system based on renewable energy. 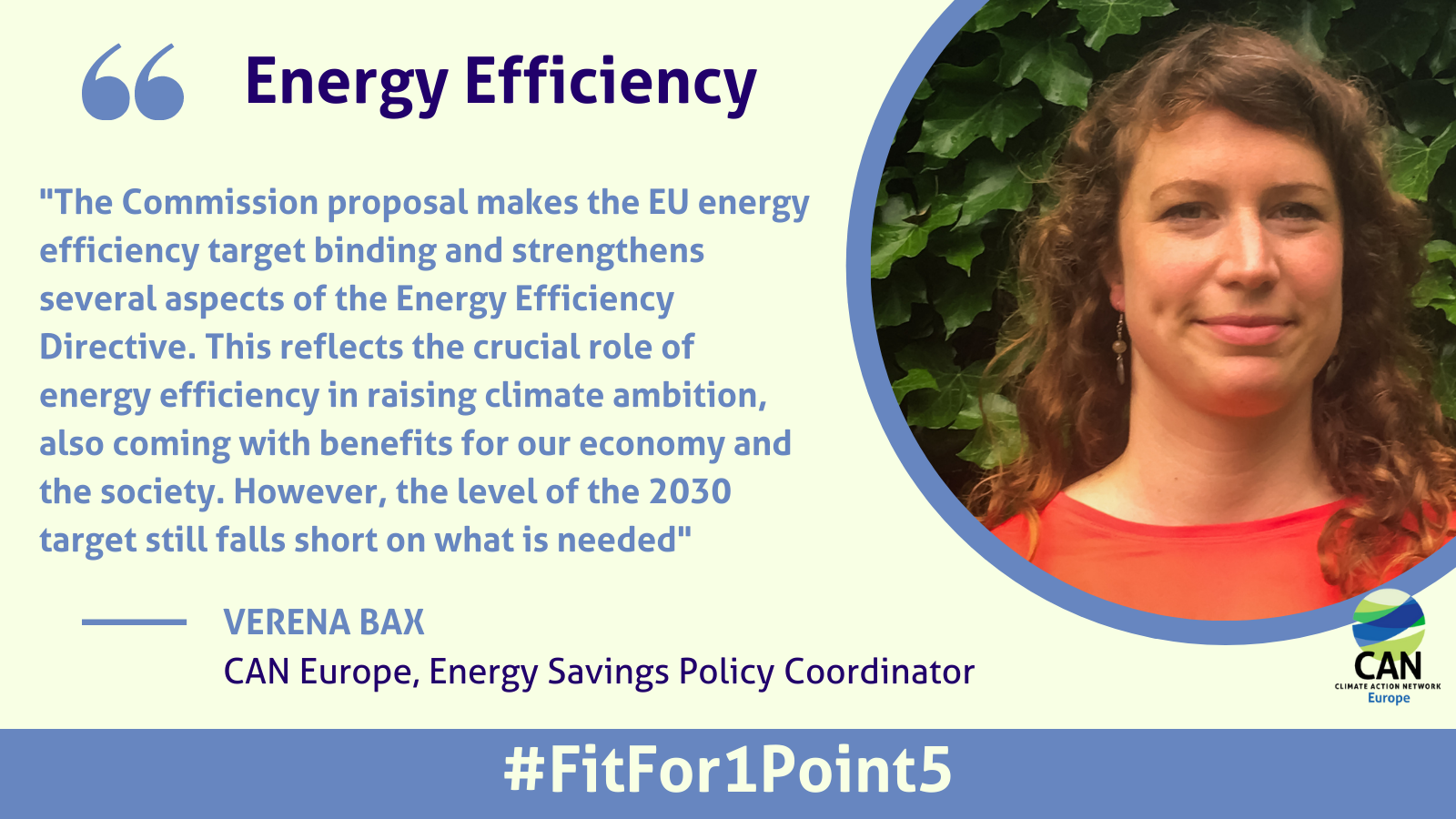 The Commission is proposing to establish a new fund to support mainly low-income households and counterbalance impacts from increased consumer prices for home heating and car fuels. The fund will be financed through dedicated sources from the EU budget and complemented by Member States’ revenues from the auctioning of emission allowances under the newly established carbon market for road transport and buildings. Increasing support for the most vulnerable is essential, but the fund will not be sufficient and the socio-economic situation of low-income and energy poor households cannot be addressed by climate policy alone.

A socially-just and fair transition requires the mobilisation of all available funds for climate action, more ownership and accountability for Member States to manage the transition and more inclusive and participatory governance at local, regional, national and EU-level. 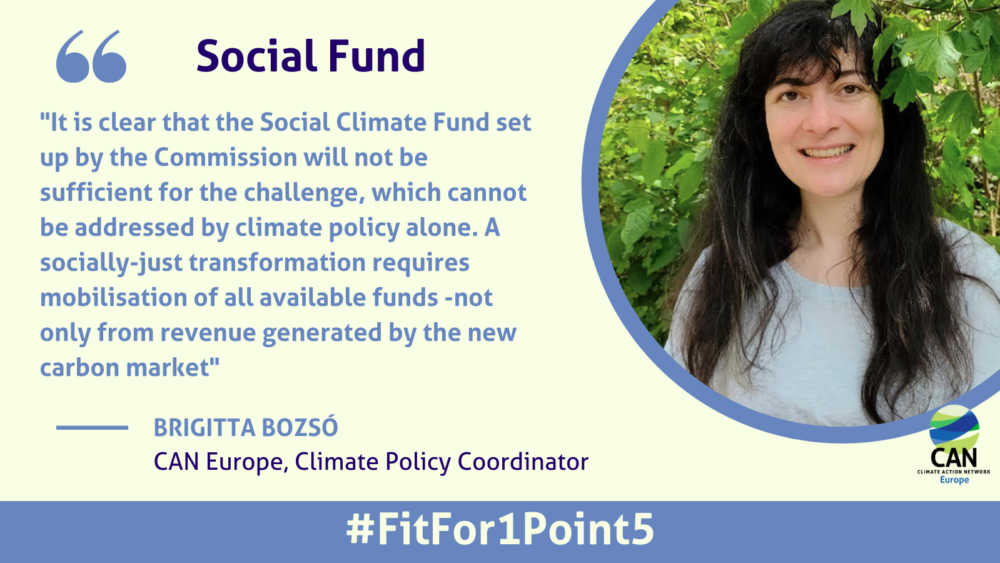 The European Year of Youth: we all CAN (and have to) connect with youth

Overwhelmed, scared, exhausted, anxious, drained, hopeless, depressed. This is just a glimpse of how youth feels today. And it’s no surprise why: current generations are faced with a socio-economic system