In January 2021, the European Commission published a list of candidate projects for the 5th list of Projects of Common Interest, or PCIs. PCIs are cross-border energy infrastructure projects which receive the highest political support at EU level: faster permitting procedures, streamlined environmental impact assessments and eligibility for a dedicated line of EU funding (the Connecting Europe Facility, or CEF).

74 fossil gas infrastructure projects have applied and are eager to receive the PCI label. None of them should be selected, for a variety of reasons.

What is wrong with the new gas infrastructure?

Fossil gas is a climate-polluting fuel. In Europe, it is already responsible for more CO2 emissions than coal. The production, transport and use of fossil gas is also inevitably linked to dangerous and significantly underreported emissions of methane, a greenhouse gas which is responsible for nearly 25% of global warming observed today and hence makes tackling fossil gas an important element of any actions that address the climate urgency.

Accordingly, building new fossil gas infrastructure is simply incompatible with Europe’s commitment to reach climate neutrality by 2050, and even less by 2040, which is what is needed to limit temperature increase to 1.5°C and be in line with the Paris Agreement. It is also unnecessary and economically unviable: all credible scenarios, including the European Commission’s projections in line with its 55% emissions reduction target, would translate into a decrease in fossil gas demand between 32% and 37% in 2030 -and beyond. New fossil gas infrastructure would therefore result in stranded assets and a waste of taxpayers’ money to be borne by citizens.

Around two thirds of the fossil gas candidate projects’ PCI fiches mention the possibility for the infrastructure project to carry hydrogen in the future. While there might at some point be limited use in repurposing a very low number of existing gas pipelines to carry renewable hydrogen, it is concerning that the argument of future use for hydrogen is used for fossil gas infrastructure that is not even built today and that would come on top of an already oversized gas grid. The debate of possible hydrogen readiness must not cover up the risk of creating stranded assets with the build-out of the EU’s gas grid, and it must not distract from a need to decommission gas infrastructure.

There is no way around it: including fossil gas infrastructure in the 5th PCI list means perpetuating support of an energy infrastructure that will be incompatible with the EU’s own vision of a future-proof energy system.

What is wrong with these 74 candidate projects? 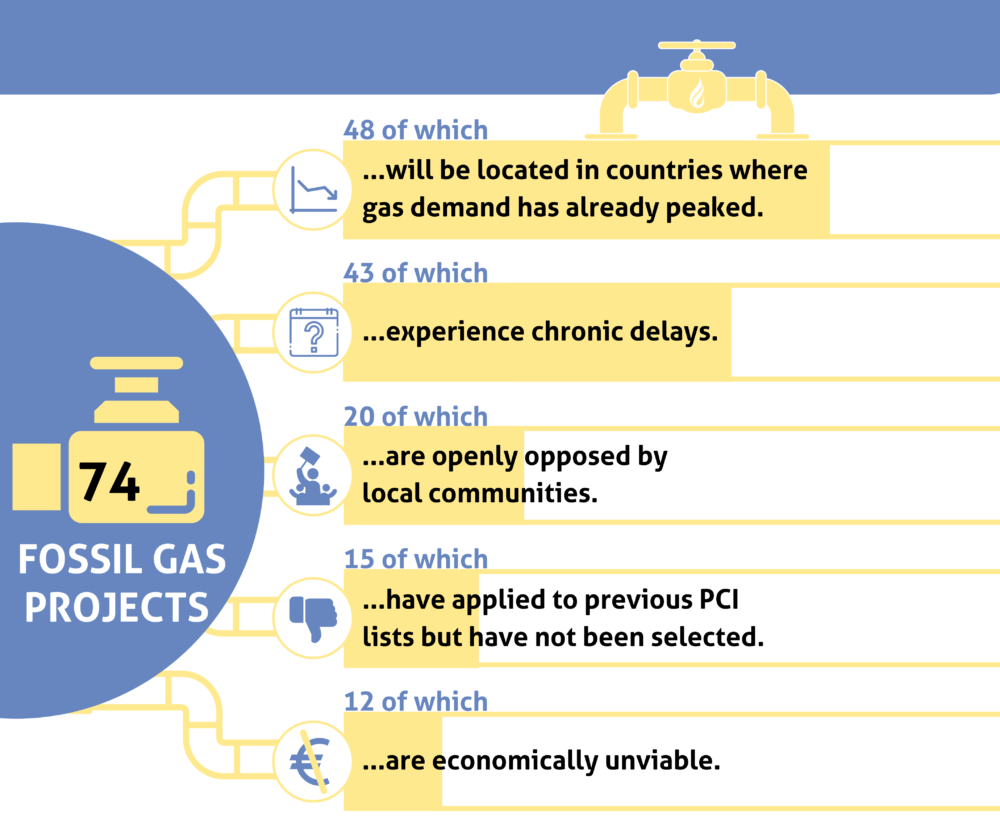 Every two years, the European Commission adopts a new list of PCIs in the form of a delegated act. The European Parliament and the Council of the EU have two months (with the possibility of a prolongation of another 2 months) to adopt or oppose the
entire list, including all PCIs from all categories. The publication of a final draft 5th list of PCIs is expected by late 2021. The process to select which projects will be included has already started in January, with the publication of a new list of candidates. Before being adopted by the European Commission, it will be discussed during Spring and Summer 2021 in Regional Groups – a platform heavily influenced by electricity and transmission system operators.