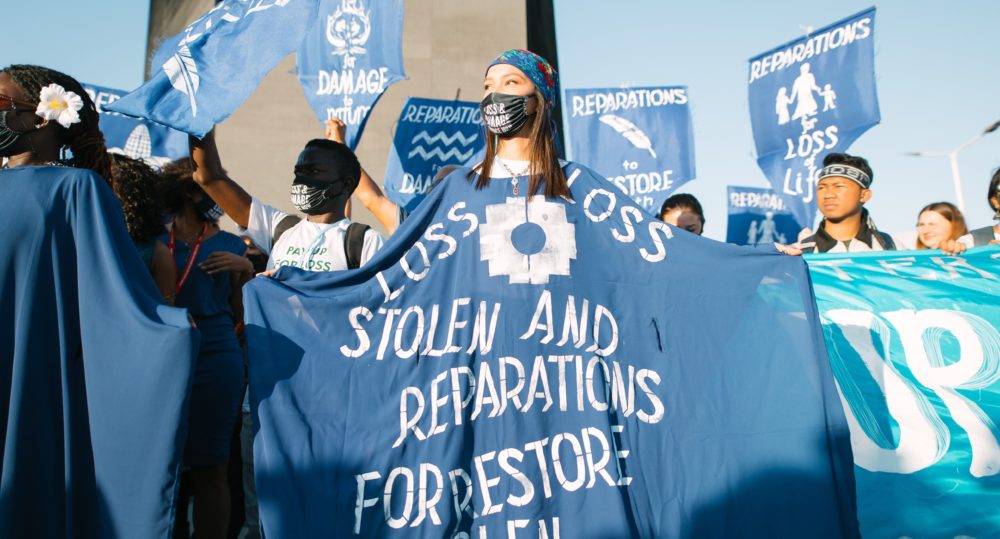 Link to photos and videos of the protest available here

Sharm el Sheikh, Egypt. 11 November 2022 – Amidst the formal agenda on the UN climate negotiations in Egypt, hundreds of people led by seven women from the Global South rose up today in a dramatic and powerful show of force recreating flooding in order to raise awareness about the heavy climate change impacts many people are living through in low income countries on the frontlines. Protestors from the civil society, wearing blue as part of the #FloodTheCOP, sent a clear message: The G7 and other rich nations have a moral and legal responsibility to tax and wind-down fossil fuel companies based in their territories, and to redirect those finances to people in countries who are suffering the most  losses and damages due to climate change.

The seven women wore dresses with slogans such as “The Flood Is Coming” and “Pay Up Now” condemning European and other countries who are using COP27 to lock African countries into new fossil fuel projects by shopping around for new deals to replace Russian gas, and even providing public finance towards this end.

For the first time in 30 years of the UN climate talks and after a great push from developing countries and the civil society, “loss and damage” is formally on the agenda, with the negotiations focused on agreeing to set up a funding facility. Outside the negotiations, several government representatives at COP27, such as Gaston Browne of Antigua and Barbuda, and Mia Mottley of Barbados, are already proposing constructive ideas for how to source the finance for loss and damage. Many of these are focusing on addressing the root cause of the problem: fossil fuel companies and its ties with public policy. Governments could tax profits or put a levy on upstream extraction by fossil fuel companies to secure financing for loss and damage.

As Gaston Browne, Prime Minister of Antigua and Barbuda, said in his opening remarks, “The oil and gas industry continues to earn almost $3 billion daily in profits. It is about time that these companies are made to pay a global carbon tax on their profits as a source of funding for loss and damage[…] Profligate producers of fossil fuels have benefited from extortionate profits at the expense of human civilization.”

Loss and damage finance from developed to developing countries should be provided through new and additional public funds. Crucially parties must agree at COP27 that a new loss and damage finance facility be set up to have oversight at the UNFCCC and to administer a significant proportion of funds. Harm must be rectified through financial means, including payouts after climate disasters with finance that is delivered quickly and is  accessible, and direct payments to climate refugees, frontline impacted communities, Indigenous Peoples and workers. Finance should be provided for both economic and non-economic losses (such as loss of culture, land or sacred sites) and should be provided to help communities reconstruct and rehabilitate in the longer term.

Developed countries have so far failed to deliver the promise of more than a decade ago to provide USD $100 billion dollars per year to help poorer nations from 2020-25, with a particular shortfall in adaptation finance. Investing in mitigation and adaptation would avoid having to deal with so many impacts of climate change. At the same time, the EU has shown itself capable of raising billions of Euros in response to the COVID-19 crisis or the financial crisis, and continues to pour billions of public finance into fossil fuel subsidies. The EU has paid over 90 billion EUR for Russian fossil fuels since the beginning of the war. Priorities are changing and some countries in Europe, such as Scotland and Denmark, have already shown that loss and damage finance is no utopia, even if with symbolic contributions.

In addition to loss and damage, reparations was a critical issue raised by the activists. Climate reparations require that stolen wealth and land be returned to Indigenous Peoples, frontline impacted communities, and workers. Countries from the Global North owe a tremendous debt to the Global South who are most impacted but least responsible for the climate crisis.

Women in blue dress – Carmen Capriles (Bolivia), Reacción Climática, WGC, DCJ: “These negotiations are lost and damaged! It’s a plenary crisis and leaders are not realising how serious it is. After 30 years of fighting we finally started talking about loss and damage. But we must not let climate funding be tainted by government corruption and make sure it gets to local level! If we would have done enough on mitigation and adaptation we would have created the necessary resilience to face this climate crisis.”

Different mechanisms through which governments could raise money from fossil fuel companies for loss and damage.

Women in dresses available for interviews: