What is the ECT? A trade and investment treaty which protects investments in the energy sector. Its provisions, effectively unchanged since conception in 1994, include the ability for fossil fuel investors to sue governments through private tribunals for multiple-billions of dollars if action on climate change and the environment damage their future profits.

What has the EU been trying to achieve in the reform? The EU and its Member States have long considered the ECT to be outdated, in conflict with basic principles of EU law, and a hindrance to climate ambition. In response they started a process to reform the Treaty in 2018. The EU set itself a threefold objective for the reform. This briefing summarises our analysis of progress towards those ambitions. 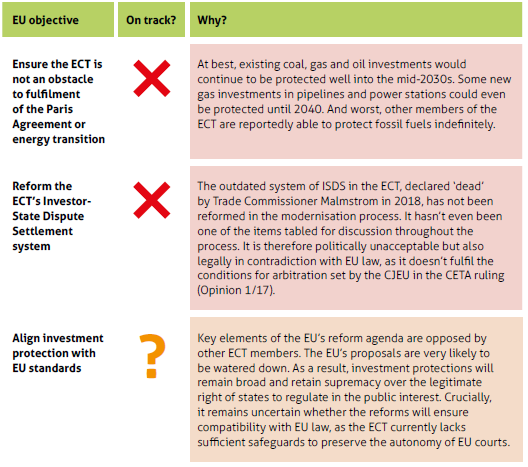 All available information indicates that ECT reform is failing to deliver on the EU’s own objectives. The ECT would continue to pose a threat to climate action, certain key provisions (including ISDS) would continue to be in conflict with EU law and would undermine the EU’s reformed approach to investment protection. Some progress has been made on the issue of investment protection standards but in practice, these improvements will be insufficient to fulfil the EU’s objective to safeguard states’ right to regulate. There can only be one conclusion. The ECT reform has not delivered what it needed to. The EU and several member states have stated before that in such a case, they would consider leaving the ECT. The time for the EU and its member states to decide on a joint withdrawal from the ECT is now. In order to neutralise the sunset clause, which allows investors to sue for another 20 years after a state has withdrawn, states should conclude an additional agreement to not apply this clause amongst one another.

Energy Charter Treaty reform: Why it has failed to deliver on the EU’s own objectives -Full Briefing

ECT reform: Why it has failed to deliver on the EU’s own objectives -Summary