The role of energy savings in fighting climate change is fundamental and widely acknowledged in the political debate. This is also supported by different scenarios which require a significant reduction of energy demand in order to achieve substantial emission reductions, when exploring ways to reach climate neutrality.

However, there is a discrepancy between the recognition the idea of energy efficiency receives by policy makers and the commitment needed to make it happen on the ground. Although energy efficiency measures have contributed to declining energy consumption trends over the years, energy consumption still increased from 2014 to 2017, while in 2018, the change was marginal compared to the previous year. In 2019, both primary and final energy consumption decreased, but current progress is worryingly slow and not sufficient to tap into the full potential of energy savings. Before the COVID crisis, Europe was still far off course to meet its 20% energy efficiency target in 2020.

The EU and the Member States need to pick up the pace on energy savings, as the next ten years will be decisive in reaching the 1.5°C objective, requiring an unprecedented scale of action in all sectors. This means for example tripling the rate of building renovations and substantially increasing their depth, while making further use of more efficient appliances and phasing out fossil fuel based heating systems. A circular economy approach as well as modernised and electrified production processes are needed for industry to significantly reduce resource use, while a quick shift to electric vehicles should be combined with a modal shift towards public transport.

Everything needs to be done much faster and to a much larger extent. Political will is needed to really prioritise energy efficiency. The EU policy framework should set the pace with strong and binding targets and measures, helping ensure a level playing field. The implementation of transformational measures at the national level can drive the reduction of energy consumption, bringing along with it other benefits beyond greenhouse gas emissions such as job creation, lower energy bills and improved health.

2021 and the years to come will be key to increase the level of ambition of the policies on energy efficiency, starting with the vital update of the EU legislation included in  the “Fit for 55 package” such as the Energy Efficiency Directive. The focus should be on ambitious policies that tackle climate change and benefit people and the economy.

Aim of the briefing

The revision of the Energy Efficiency Directive presents a unique opportunity to build on the improvements achieved under the previous review and address the remaining weaknesses in order to strengthen the energy efficiency policy framework and ensure that action on energy efficiency becomes a true priority.
This briefing presents a concise overview of this important piece of legislation and its recent changes under the review that was finalised in 2018. It also outlines a set of key options that need to be put forward within the EED to improve the current policy framework and increase its ambition. These include:

State of Play in a nutshell

A series of policies and measures in the form of directives and regulations have been put in place to improve energy efficiency and reduce energy demand in different sectors. The Energy Efficiency Directive (2012/27/EC) was adopted and entered into force in 2012 with the aim of comprehensively addressing barriers that are considered to be prominent in implementing energy savings policies. Such barriers include the lack of upfront finance, low awareness and information among consumers on why and how to save energy, split incentives between buildings’ owners that need to pay for the measures and tenants who can benefit from them.
In 2016, the European Commission presented its “Clean Energy Package for all Europeans” to enact the EU’s 2030 climate and energy framework. The Package incorporated a proposal to review the Energy Efficiency Directive (EED), including an energy efficiency target and targeted adjustments to specific key provisions to fit the 2030 timeline. The amended Energy Efficiency Directive, which was not revised in its entirety, was adopted in 2018 and entered into force in 2019.
During this process, the European Parliament pushed for higher ambition than originally proposed by the European Commission for the 2030 energy efficiency target and for safeguarding the energy savings obligation as an important tool to drive action on energy efficiency against the aggregated position of the Council to weaken this provision.
The Energy Efficiency Directive (EED) has strengthened the European legislative framework, starting with setting EU targets which provide the strategic direction for taking action on energy efficiency. At the same time, its cross cutting provisions made Member States consider energy efficiency more systematically. Member States for the first time under the EED had to set national energy efficiency targets/contributions and report on them in a comparable way. Although the targets/contributions are indicative, this facilitates the process of monitoring the EU progress towards meeting its collective energy savings target. Furthermore, the provisions on the energy savings obligation which are mandatory helped maintain or set in motion the implementation of many national energy savings measures. According to a recent report of the Joint Research Centre on the energy efficiency dimension of the final National Energy and Climate Plans (NECPs), a total of 372 national policies and measures have been identified in the NECPs in relation to the implementation of the EED’s energy savings obligation for the period 2021-2030.

The new developments brought forward by the adoption of the European Green Deal together with the commitment to climate neutrality and to a higher climate ambition for 2030, demand once again from the EU to update its energy targets and the corresponding legislation. Reducing greenhouse gas emissions in line with the objectives of the Paris Agreement will require a profound transformation of all sectors of the European economy. This transformation needs to be supported by a bold policy framework at European and national level.

In this context, the upcoming EED review presents a great opportunity to further build on the improvements achieved under the 2016 – 2018 review and address some of its remaining weaknesses. This will help grasp more of the multiple benefits energy savings have to offer to European citizens beyond greenhouse gas emission reductions such as job creation, lower energy bills and improved health. According to the European Commission, the evaluation of the EED will focus on elements that were not revised in 2018, while the Impact assessment for its revision will be looking at the entire legislation, analysing different policy options on what needs to be streamlined, strengthened, added or changed in view of meeting the increased 2030 greenhouse gas emissions reduction ambition. CAN Europe key priorities on the EED review are presented below.

The EED defines the level of the EU 20% energy efficiency target for 2020, as a total annual energy use for the EU-28 in 2020 of 1483 million tonnes of oil equivalent (Mtoe) in primary energy and/or 1086 Mtoe in final energy. However, it neither goes so far as to make the target legally binding nor does it break it down into individual national targets for each country. Member States were required to set their own ‘indicative’ national targets.

It also includes a headline energy efficiency target for 2030 of at least 32.5% which was set with the review in 2018. This is translated to a total energy use for 2030 of 1128 Mtoe in primary energy and/or 846 Mtoe in final energy for the EU-27. This target although higher than what the Commission originally proposed back in 2016, it is not in line with the Paris Agreement goals and does not maximise the benefits for citizens and society. Member States had again to set their own ‘indicative’ national contributions.

With the increase of the 2030 climate target, it is only logical that the level of ambition of the energy targets increases as well. This is also indicated in the Commission’s Impact Assessment accompanying the Climate Target Plan. This will reconfirm and further support the collective commitment of Member States for achieving Europe’s climate neutrality goal, in a mutual reinforcing way.

However, as action in the next ten years will be decisive in reaching the 1.5°C objective, the EU should strive for at least 65% greenhouse gas emission reductions by 2030. The agreed net 55% target still falls short of what the EU needs to do. This also means that the increase of the 2030 energy efficiency and renewable energy targets should go well beyond what is indicated in the 2030 Climate Target Plan. The Communication on the Climate Target Plan highlights that, to achieve the net greenhouse gas emission reductions of 55%, there is a need to increase the level of ambition for energy efficiency to 36-37% for final energy and 39-41% for primary energy consumption by 2030 from the current headline target of at least 32.5%. CAN Europe supports an increase of the level of ambition of the EU’s 2030 energy efficiency target, to at least 45%, combined with an at least 50% target for renewable energy.

Higher levels of ambition for 2030 than those foreseen in the Climate Target Plan should be considered for the Energy Efficiency Directive and the Renewable Energy Directive, also taking into account the multiple benefits energy efficiency and renewable energy have to offer.

Furthermore, the European Commission’s recent assessment of the final NECPs, indicated a gap of around 3% in the level of ambition of the 2030 national energy efficiency contributions towards the 2030 EU energy efficiency target which remains non binding. At the same time, the assessment of the renewable energy national contributions did not show any gaps towards the EU renewable energy target, which is binding. This clearly showcases the importance of binding targets. Therefore, both EU energy targets should be binding.

This should be combined with national binding targets in order to ensure accountability at the national level. Even if the current 2030 EU renewable energy target could be collectively achieved, as indicated by the Commission’s analysis, there are still some Member States that do not even meet the minimum level of ambition indicated in their country-specific benchmark which is in line with that target. This shows that the current system is not sufficient to ensure that governments prioritise action on renewable energy and energy savings.

Key improvements related to different provisions of the Energy Efficiency Directive (EED) include:

Overall, achieving the objectives of the Paris Agreement requires the reform of all climate and energy policies. Strengthening the energy efficiency policy framework through a dedicated mix of EU and national strong binding targets and robust policy measures will help mobilise the investments needed for the transition to a highly efficient and fully renewables based energy system. In this context, the EED revision which includes the overall energy efficiency target for the EU should provide the right signal for this reform. 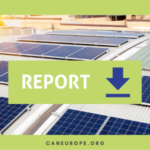