Berlin/Brussels, 20 September 2022 – New report by Climate Analytics, in partnership with CAN Europe and AirClim, shows that the EU could reach net zero emissions by 2040, a decade earlier than planned, if its policies followed one of the many feasible 1.5°C compatible pathways seeking substantial emissions reductions.

The report, “1.5°C pathways for the EU27: accelerating climate action to deliver the Paris Agreement”, examines 1.5°C compatible climate scenarios for the EU27. 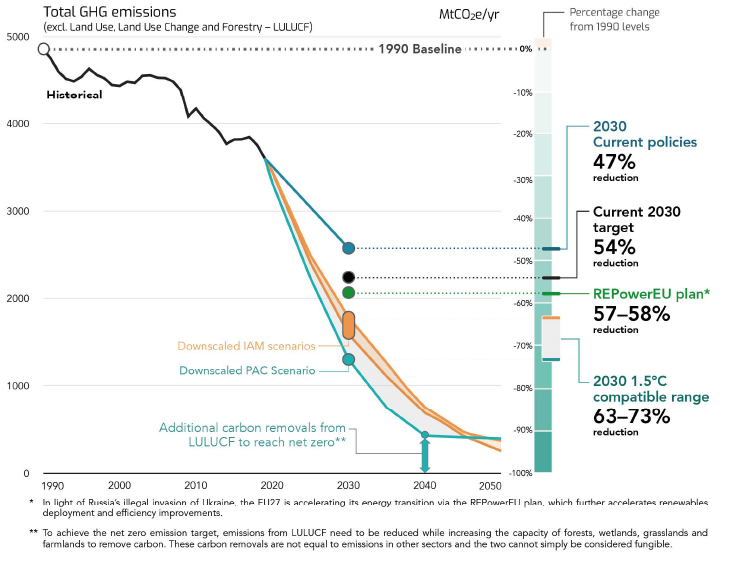 This figure shows domestic 1.5°C compatible GHG emissions for the EU27, compared to current policies and targets proposed by the bloc. The EU’s current policies and targets do not align with 1.5°C, as assessed in this report. All targets and plans are converted to exclude LULUCF and international aviation and shipping within the EU27. Historical data is taken from PRIMAP (Gütschow et al 2021).

The study finds that to limit temperature rise to 1.5°C, the EU should aim to reduce its emissions between 66% and 77% (including Land Use, Land Use Change and Forestry -LULUCF) below 1990 levels by 2030. This confirms the urgent need for much higher reductions to globally contribute to limiting climate change and its impacts. It also underpins CAN Europe’s long-standing demand for reductions of at least 65%.

The higher ambition is technically and economically feasible if the EU rapidly upscales renewable energy over the coming decades, with wind and solar as the cornerstone of the energy transition.

Moreover, the report shows that the deployment of additional electricity transmission infrastructure in Europe could realise a zero-carbon power system at substantially lower costs. In fact, most of these benefits can be achieved with only around 25% more transmission capacity than what is installed currently.

However, although the tools are already available and ready to be implemented, the bloc’s current climate action is not in line with the level of ambition that is required by the Paris Agreement despite the most recent ‘REPowerEU’ plan.

“We are seeing what climate change and its aftermath is doing to our increasingly scorching summers and difficult to cope winters in Europe. But nothing compares to the extent of devastation we are witnessing in countries of the Global South, like the floods in Pakistan that have flooded one third of the country affecting millions of people. As a rich economy, as well as a major historical emitter, the EU should strive to set a leading example and heavily cut down its emissions to fairly contribute to keep us all safe. It’s the only way.” said Climate Action Network (CAN) Europe’s Director Chiara Martinelli.

The urgency of the situation was also remarked at the opening of the United Nations General Assembly, when UN Secretary-General, António Guterres said “There is nothing natural about the new scale of these disasters.  They are the price of humanity’s fossil fuel addiction.”

On top of climate change impacts, the energy crisis followed by the Russian invasion of Ukraine has created new energy concerns in Europe, pushing the bloc to consider new ways of producing energy sustainably (and durably) without depending on external suppliers. In fact, the report is intended to inform the strengthening of the current EU’s 55% emission reductions target and the on-going legislative process on the bloc’s key climate and energy laws packaged under ‘Fit for 55’ and ‘REPowerEU’.

“The EU really stands to gain from a push to increase its climate targets before COP27, as it said it would in Glasgow last year. With the new ‘REPowerEU’ plan it looks like EU emissions cuts will eclipse its current 55% target, suggesting that the bloc could easily put forward a higher number for 2030 – it’s more a question of what that number should be. Even with ‘REPowerEU’ the bloc will still fall short of the range of emissions cuts required for 1.5°C,” commented Ryan Wilson, Climate and Energy Policy Analyst at Climate Analytics, and one of the report authors.

“Our work shows that increasing the EU target considerably, making it 1.5°C compatible – is not only technically feasible, but cost-effective, and would demonstrate internationally that the EU is taking the lead on climate.” concluded Ryan Wilson.