On 13th October, EU Environment Ministers are expected to agree on their position on one of the EU’s cornerstone measures for the implementation of the Paris Agreement, the Effort Sharing Regulation (ESR).

The negotiations of this policy show that EU Member States play a two-faced game on climate: they claim commitment to the Paris Agreement, but at the same time try their utmost to avoid real climate action at home.

The new law sets national binding 2030 targets to reduce emissions from transport, waste, agriculture, buildings and small industry, covering more than a half of the EU’s greenhouse gas emissions. Both the EU-wide target to reduce emissions by 30% by 2030 compared to 2005 levels and all the national targets are too low to limit temperature rise well below 2°C, let alone 1.5°C in line with the objectives of the Paris Agreement.

So far EU countries have disregarded the need to raise the level of ambition, and instead have advocated measures that further reduce their contributions. The loopholes in the new law include an inflated starting point for emission reductions, the ability to use credits from the land use sector or surplus allowances from the Emissions Trading Scheme, and a carry-over of some unused pollution permits from the past. The German proposal to slightly adjust the starting point has received limited support so far [1].

In its current shape, the impact of the Effort Sharing Regulation on the climate will be extremely limited. The numerous concessions will lower the already weak 30% target under the ESR to a mere 23%. This is very close to the reductions projected to be achieved even without setting 2030 targets [2: see graph below].

“This key climate legislation is not only out of sync with the Paris Agreement, but it will also, in its current shape, have almost no impact on the climate. It is hypocritical that EU countries vow commitment to the Paris Agreement, only to undermine this through accounting tricks in climate legislation. This week’s meeting of EU Environment Ministers is the last chance for countries like Germany and France to match words with deeds and save this climate policy from redundancy. As a bare minimum, they need to align the starting point with real emission levels.”

„The new German government will need to ramp up its efforts on climate change both at domestic and European levels, bringing them in line with its commitments. We need a European debate on increasing ambition, and Germany is capable of playing a key role. The upcoming decision on the Effort Sharing Regulation is an important opportunity to walk the talk on climate action and push for an effective instrument that can drive the transition in crucial sectors like transport.”

“The decision on the Effort Sharing Regulation will test Macron’s will to defend the effective implementation of the Paris Agreement in Europe. An ambitious agreement on the ESR can drive the necessary and deep transition of our agricultural and transport models, for the benefit of citizens. France and Germany have to urgently lead the charge for the EU to increase its ambition on climate action and to take the global leadership. It is time for Macron to translate his strong statement for climate and Europe into concrete actions.”

[1] German government has proposed to use the 2020 targets as a starting point for those Member States that are expected to miss their 2020 targets (Austria, Belgium, Denmark, Ireland and Luxembourg, according to European Environment Agency’s 2016 “Trends and projections” report). This would save around 100 MT CO2 emissions and ensure that laggards cannot avoid meeting their binding targets. 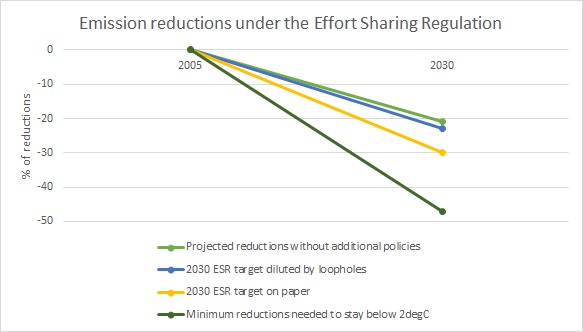 [3] On Tuesday, 10th October CAN Europe organized a press briefing on the state of play of the ESR negotiations. Our speakers provided an in-depth analysis of the EU countries positions and the likely outcomes of the Environment Council. They also explain what a genuine “Paris Agreement compatible” ESR would look like and what role France and Germany play in the talks.

You can listen to the audio recording of the briefing here

[5] Infographic: “No cheating from the start”, which shows that a misguided starting point for the Effort Sharing Regulation (ESR) would increase EU emissions by 500M+ tonnes compared to starting from real emission levels