The Modernisation Fund is recognised in the European Green Deal Investment Plan as one of the key funding instruments, potentially providing around €25 billion to support Member States in their transition to a climate-neutral society. The Fund will start supporting projects as of 2021. There are many loopholes in its current set-up which can cause a continued lock-in into fossil fuels in the Beneficiary Member States. It is likely that the European Commission will also suggest changes to the Modernisation Fund as part of their legislative proposal for the revision of the Emissions Trading Directive (ETS). Several Member States have been actively calling for an increase of the Fund. This briefing aims to set out a number of principles and demands to ensure that:

In December 2020, the European Council agreed on increasing the EU’s 2030 climate target to at least 55% net emission reductions and gave the political green light to the European Commission for presenting a broad package of legislative proposals and revisions to key EU climate and energy policies in June 2021, the so-called “Fit For 55” package.

Achieving a higher level of climate ambition will require substantial additional investment, both private and public. The European Commission, in its impact assessment on the 2030 climate target estimates that policy scenarios in line with the at least 55% target will increase additional investment needs to between EUR 65 billion and EUR 102 billion per year. Hence, the discussion about implementing the new level of climate ambition is closely linked to the search for additional funding sources and the question of how the EU’s financial resources should be spent over the coming years.

One source of particular interest in Central and Eastern European Member States is the Modernisation Fund, a new financing tool created under the EU Emissions Trading System (ETS) during its revision in 2018. The Fund will start supporting projects in Phase 4 of the EU ETS, meaning between 2021-2030. Currently, Member States are selecting priority and non-priority investment projects to be supported by the Fund. Once approved by the European Investment Bank and the European Commission, these investment projects will be the first ones to benefit from the Modernisation Fund. The selection and assessment processes, including criteria, are very important as the investment decisions made today will determine the European economy’s progress on the pathway to climate neutrality and will have a direct impact on the communities to benefit from these investments.

It is likely that the European Commission will also suggest changes to this Fund as part of their legislative proposals for the revision of the ETS Directive. Several Member States, particularly Poland, have been quite active in calling for an increase in these financial resources dedicated to supporting the transition in Central and Eastern European Member States, raising their specific demands for a revamp of the Modernisation Fund over the past weeks and months.

In December, the European Council conclusions also picked up on these demands: “The problem of imbalances for beneficiaries of the Modernisation Fund is not receiving revenues that are equivalent to the costs paid by the ETS installations in those Member States will be addressed as part of the upcoming legislation”.

The Modernisation Fund has been established through Article 10d of the EU ETS Directive and is accessible for 10 lower-income Member States with a GDP per capita at market prices below 60% of the EU average in 2013. These eligible Member States are Bulgaria, Croatia, Czech Republic, Estonia, Hungary, Latvia, Lithuania, Poland, Romania, Slovakia.

The objective of the Fund is to support investments proposed by the beneficiary Member States, including the financing of small-scale investment projects, to modernise energy systems and improve energy efficiency.

The Modernisation Fund is funded from the revenues generated by 2% of auctioned emission allowances for the period 2021-2030, and additional allowances transferred[4] to the Modernisation Fund by beneficiary Member States – see overview below. The Fund is also recognised in the European Green Deal Investment Plan as one of the key funding instruments, to provide some €25 billion – total amount depending on the expected carbon price revenues – for the EU transition to climate neutrality. 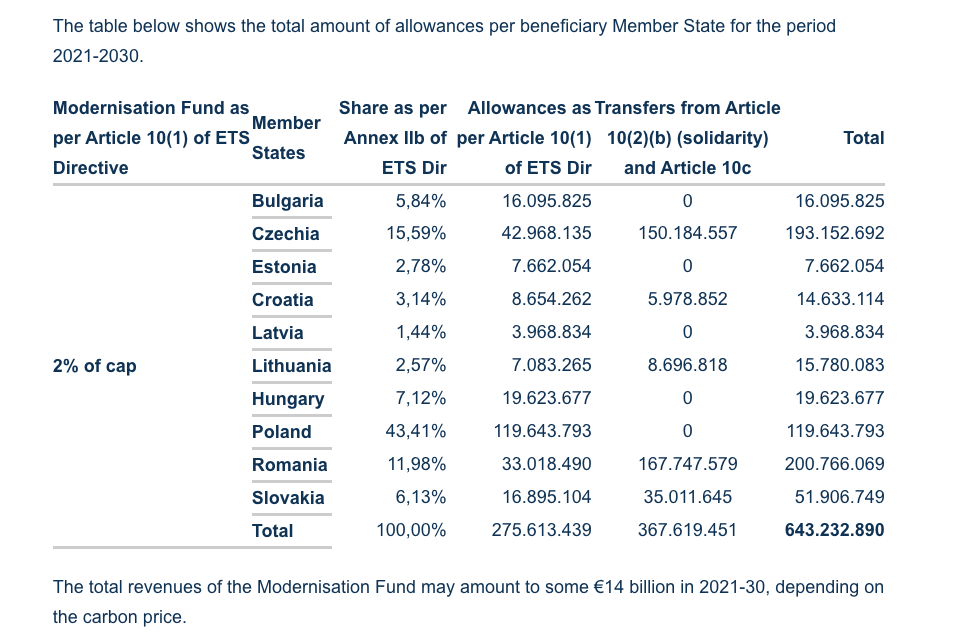 Eligibility criteria are set out in Article 10d, paragraphs 1 and 2. No support for solid fossil fuels (coal) is allowed, with the exception of “efficient and sustainable district heating” in Bulgaria and Romania.

In the current funding programme, at least 70 % of the financial resources from the Fund shall be used to support ‘priority investments’ in renewables, energy efficiency, energy storage and the modernisation of energy networks, including district heating networks, grids for electricity transmission and interconnections. Investments in energy efficiency in transport, buildings, agriculture, and waste can also be eligible. The Fund can be used to support just transition, additionally to the Just Transition Mechanism, in funding redeployment, re-skilling and up-skilling of workers, education, job-seeking initiatives, and start-ups, in dialogue with the social partners.

This means that currently, up to 30% of the Modernisation Fund could still be used for ‘non-priority investments’ meaning non-solid fossil fuels such as gas or oil shale.

The current framework fails to ensure consistency of the eligible investments in the Modernisation Fund with the EU’s climate neutrality target and engagements under the Paris Agreement, as a requirement.

In order to ensure that the EU Modernisation Fund fully contributes, and does not contradict the EU’s new 2030 climate and environmental ambitions and its long term objectives, we put forward the following recommendations:

4] Five Member States, Croatia, Czechia, Lithuania, Romania and Slovakia, opted to do so. 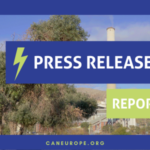