Brussels, 6 July 2021– As fresh negotiations get underway today (6-9 July) to reform the controversial Energy Charter Treaty (ECT), activists have hung a giant Damocles sword over EU leaders in a colourful action showing the threat of the treaty to climate action. And leaked diplomatic cables reveal talks are failing and EU attempts to phase down protection for fossil fuel investments were rejected.

Over 400 worldwide civil society organisations, including Friends of the Earth, CAN Europe, Greenpeace, WWF, Avaaz are today saying the ECT is an obstacle to the clean energy transition, and called for the EU and governments to exit the treaty, by the UN Climate Summit in November 2021 in Glasgow.  And in Brussels, activists dressed as politicians, paralysed by a giant four metre sword of Damocles, are depicted the threat of the treaty that is seriously hampering climate action in front of European media. 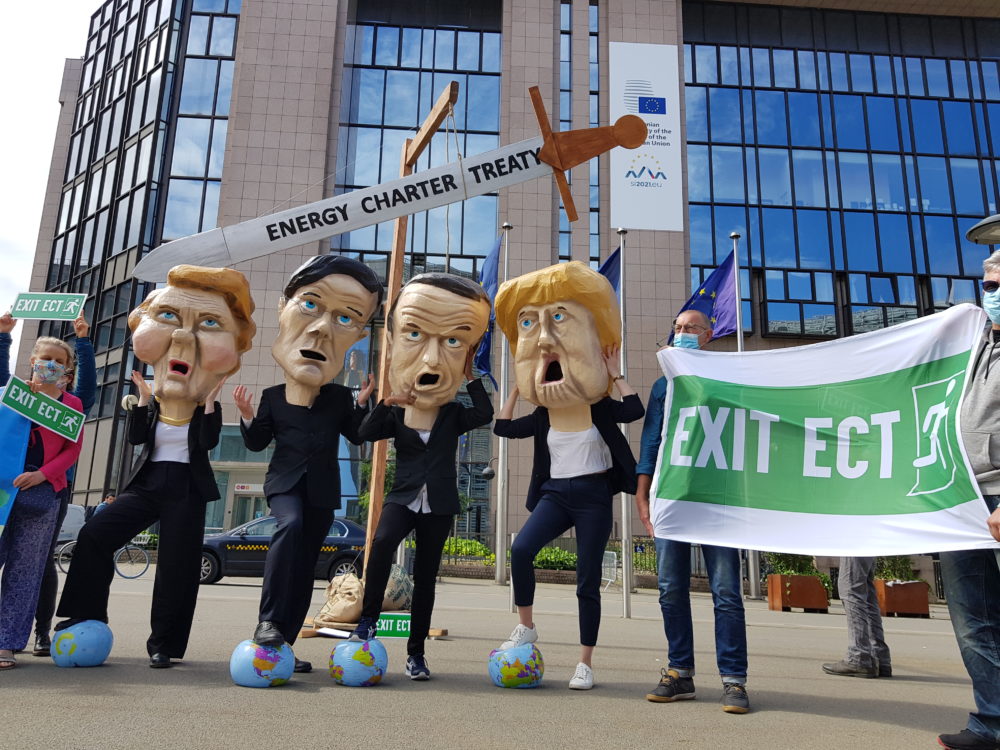 The official insider accounts of the latest, fifth, round of negotiations in June describe the European Commission’s negotiating position as “rather weak” after none of the treaty’s other members endorsed it – with one of them, Kazakhstan, rejecting it outright. As a result, the leaked cables suggest the Commission could next look for more “flexibility”. Such concessions will further inflame environmental campaigners who have slammed the EU proposals on the table as too weak to meet the goals of the European Green Deal and the Paris Agreement – as they would protect existing fossil investments and new gas facilities for another 10-20 years. Any changes require unanimous agreement of the treaty’s member countries.

A recent statement by French ecology minister Barbara Pompili to the National Assembly corroborates the shambolic picture of “weak” momentum and talks that are “not on the right track”. She has confirmed France’s ambition to rally allies, such as Spain and Poland, to operate a coordinated exit from the treaty.

Paul de Clerck, Economic justice coordinator for Friends of the Earth Europe said:
“It’s been clear from day one that this polluter protection treaty is incapable of change. A number of countries refuse to make the treaty fit for a fossil free energy system – and reject even the EU’s limp proposals. We’re in a climate crisis that allows no time to wait for negotiations that go nowhere – so the EU and European governments have no option but to pack up and exit this harmful treaty by November’s UN climate summit.”

Cornelia Maarfield, Trade and Climate Project Manager at Climate Action Network (CAN) Europe said:
“This toxic treaty is a sword of Damocles threatening to come down with multi-billion euro compensation claims when countries enact climate policies. The power and influence of fossil fuel firms must drastically reduce to make the energy transition a success, and quitting the Energy Charter Treaty is a vital step.”

The Energy Charter Treaty blocks action to transform the fossil fuelled energy system by allowing foreign coal, oil and gas companies to sue governments for actions that would harm their profits – including climate actions. [More in this media briefing.] Earlier this year, energy companies RWE and Uniper claimed billions of euros from the Dutch government for its decision to phase out coal power.

Activists accuse the Treaty of acting like a sword of Damocles hanging over decision-makers’ heads, with an investor-state arbitration mechanism that deters climate action on threat of multi-billion-euro compensation suits, creating a ‘regulatory chill’ effect. A separate NGO statement is also warning the reform could make a dangerous agreement even worse for the climate if it adds bioenergy under the ECT’s investment protection regime.

More photos from the Energy Charter Treaty stunt can be found here.