High electricity prices, the links to fossil gas and the need to shift to 100% renewables and reduce energy demand

Pursuing efforts to limit global temperature rise to 1.5°C leaves no room for fossil fuels, including fossil gas in the near future.

But the ongoing developments related to high electricity prices mainly due to soaring gas prices add further to the arguments on why the EU needs to accelerate the energy transition, which relies on significantly reducing the energy demand and shifting towards a fully renewable energy system, while phasing out fossil fuels. Putting in place stronger EU policies, including on energy infrastructure, will help in that direction.

Since January 2021 fossil gas prices have increased more than 170% in Europe, and with it, the cost of electricity. Accounting for this are the rebound in energy demand as economies reopen, constrained gas supplies from Russia and Norway, greater competition with countries in Asia for liquefied natural gas (LNG) together with unplanned outages and delayed maintenance.

Furthermore, gas levels in European storage are well below average. This is partly due to the past harsh winter combined with widespread remote working, directly increasing demand for gas for heat and electricity. Similarly, the torrid summer in Southern Europe has indirectly increased demand for gas through additional electricity demand for cooling. With the winter approaching and gas demand expected to surge in case of another harsh winter, this situation could persist or even worsen.

Thus, tight gas supply together with depleted gas storage has contributed to soaring fossil gas prices which are largely to blame for the current electricity price hikes. Countries where gas-fired power plants generate a sizable part of electricity, such as Italy and Spain, have been hit the hardest.

More in general, the structure of EU wholesale electricity markets, where the most expensive power source (mostly fossil gas) used to meet total demand sets the price for the entire market, means that the savings generated by low cost solar PV and wind power are not passed on to electricity customers. Other external factors also have had an impact on electricity prices but to a much lesser extent. These include the increase in EU Emissions Trading System (ETS) allowance price. However, as shown in the image below, spikes in fossil gas prices are the clear driver for the jump in electricity prices across many European countries. This underscores how dependency on fossil gas exposes European households to hefty and volatile energy bills. 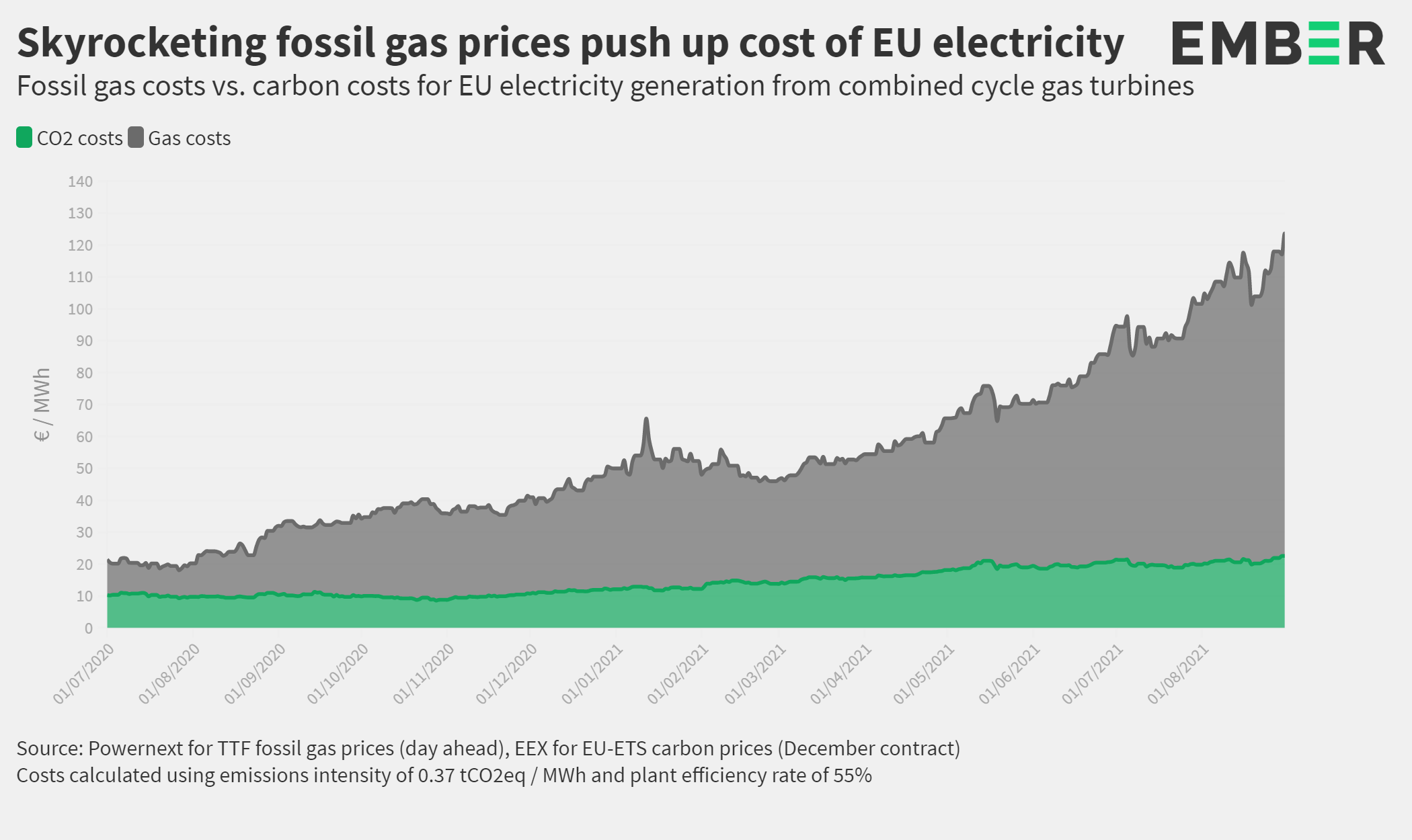 The current fossil gas crisis serves as a dire warning for those countries currently considering a coal-to-gas switch, potentially worsening domestic energy poverty while remaining incompatible with actions needed to limit the global temperature increase to 1.5°C. As a reference, already in 2019 large shares of the populations of several EU countries indicated they could not afford to keep their home adequately warm, including in Bulgaria (30.1%), Lithuania (26.7%), Cyprus (21.0%), Portugal (18.9%), and Greece (17.9%). The current crisis is poised to exacerbate this situation. Nevertheless, several EU governments are still betting big on a coal-to-gas switch, which would potentially lock their country’s energy system into fossil gas assets at high risk of becoming stranded in the near future.

Power from renewables cheaper than power from fossil gas and coal

EU countries should rise up to the energy transition challenge and accelerate away from fossil fuels, including fossil gas, towards a fully renewables-based energy system by 2040 that is underpinned by the ‘energy efficiency first’ principle, while ensuring a just transition that protects the most vulnerable. Renewable electricity generation costs have drastically decreased over the last decade and today electricity generation from new solar PV and wind power installations is cheaper than that from fossil fuels, as shown in the chart below. 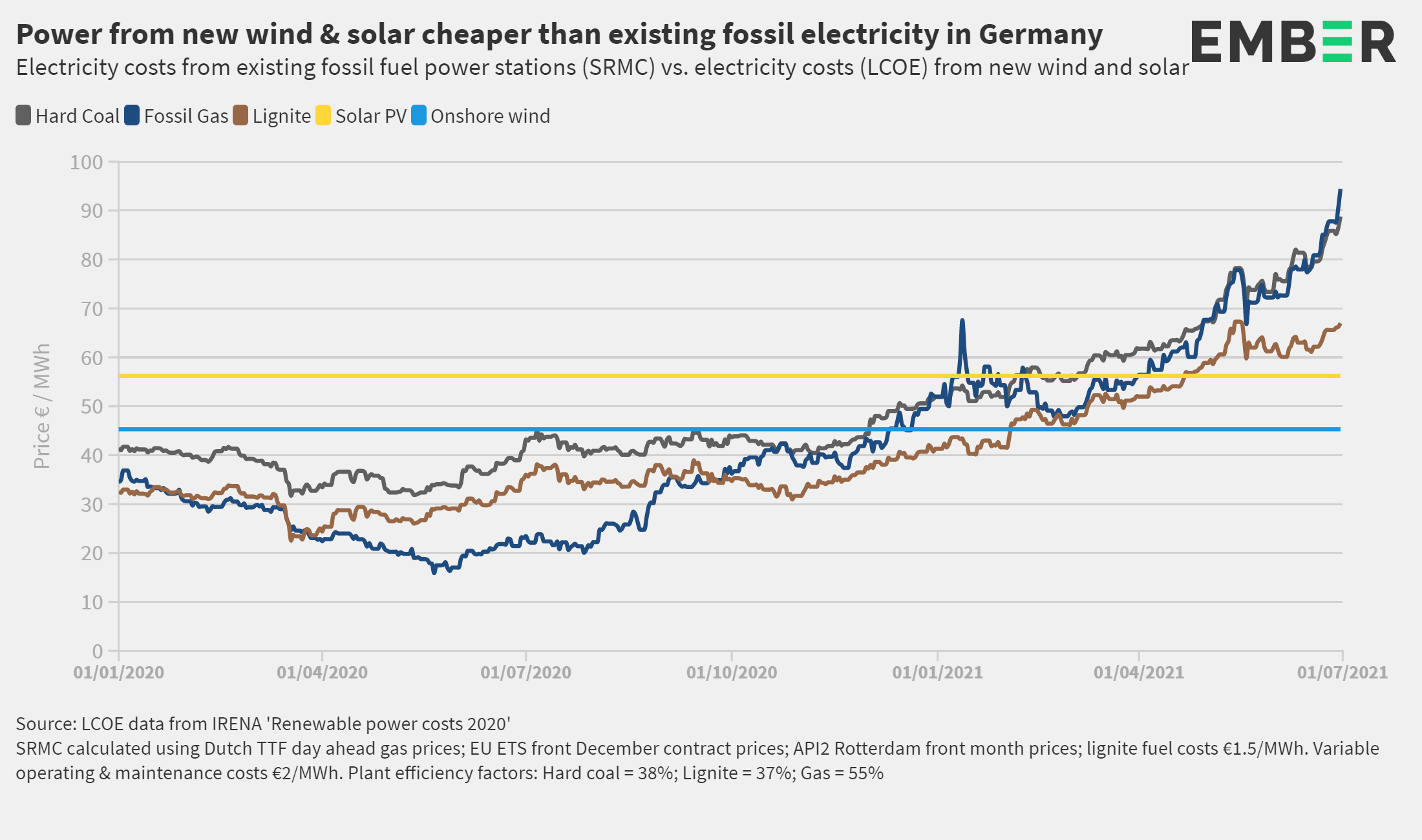 TEN-E: putting a halt on gas infrastructure build-out should be a milestone on the way to phase out fossil gas by 2035

The revision of EU legislation that is currently underway must foster this energy transition boosting energy savings and the deployment of renewable energy. More specifically, in the coming days the European Parliament will  adopt its position on trans-european energy infrastructure (TEN-E regulation) and MEPs should reject any EU support, may that be financial or fast-tracked permitting procedures, for new fossil gas infrastructure or hydrogen blending practices (i.e. admixing hydrogen to fossil gas).

Increasing Europe’s gas infrastructure is at odds with the IEA’s recent net zero report which concludes that governments must stop building new fossil fuel infrastructure if we are to limit global temperature increase to 1.5°C. It also contradicts the European Commission’s impact assessment in support of the EU’s 2030 increased climate target suggesting that fossil gas use needs to be reduced by more than a third by 2030.

The truth is that we simply cannot afford the environmental, economic, and social costs of fossil fuels, and as such, it is difficult to understand why policymakers would opt for supporting the expansion of fossil gas infrastructure and continued gas consumption.

The extreme weather events this summer, with devastating floods and fires across Europe, showed once again the bitter reality of a climate crisis unravelling before our eyes. This should be a wake-up call for policymakers to take urgent action on phasing out fossil gas by 2035 and ensuring a 100% renewable energy system by 2040.