Innovative sources of climate finance: How the EU can guarantee to provide consistent and predictable support

At the 2009 climate summit in Copenhagen, developed countries committed to contribute 100 billion dollars annually by 2020 to assist developing countries in tackling climate change by 2020. More than five years later, the issue of climate finance remains one of the most divisive topics in the international negotiations, attracting wide-scale attention on issues such as sources, channels of funding and transparency of financial flows.

Advancing towards the Paris climate summit, it is crucial that countries ensure that climate finance is a building block to success, rather than a stumbling block towards progress. Considering that the 100 billion dollar target will not be enough to cover the adaptation and mitigation needs of developing countries – India’s environment minister recently suggested the “bill for climate” would be trillions of dollars per year – there’s a worring gap between financial pledges and the support needed.

Financial Transaction Tax
The first innovative source of climate finance, presenting great potential, is the allocation revenues generated from the European financial transaction tax (FTT). The FTT entails the placement of a levy on the trades of stocks, bonds and other financial instruments. France, the COP21 host, has shown the example by implementing a micro-tax of that kind, and the funds generated have been earmarked for climate finance. In January of this year, French President François Hollande announced that France would allocate at least half of the revenues generated to climate finance, setting an important example for the other eleven European countries signed up to the FTT.

However, the goal of operationalizing and allocating FTT revenues by the end of this year is very ambitious and unlikely to be realised. Talks have so far floundered over what transactions to cover and at what rate, with countries seeking to win exemptions for assets that would hit their financial sectors particularly hard. In addition, businesses are lobbying against the FTT, arguing it would lead to unfair competition between the eleven countries implementing the tax and the rest of European Union. With that said, the potential for this source of climate finance is sure-footed; with substantial flows of financial markets, a mere 0.1% tax would bring 30 billion euros a year in the EU.

EU ETS reform
The EU Emissions Trading Scheme (ETS) is currently being revised for the 2020-2030 period, providing a key opportunity for the EU to showcase leadership in implementing another innovative source of climate finance. Through the revision countries can commit to direct a portion of the revenues from auctioning directly into the Green Climate Fund.

Recent research and analysis by Oxfam highlights that a 10% reserve could generate up to five billions euros annually for the Green Climate Fund as additional EU support. This would double current EU contributions to the Fund. It is recommended that an International Climate Action Reserve is established, managed by the EIB and replenished with a portion of ETS allowances. It would require revenues to be automatically and predictably channeled to the Green Climate Fund. This initiative will give a clear signal to developing countries that the EU is committed to continue to provide additional finance for climate needs in predictable and transparent ways.

Carbon Pricing
Another key source of climate finance is the establishment of a levy for international aviation and maritime transport. Many reasons justify the taxation of these modes of transport:

The International Maritime Organisation and the International Civil Aviation Organisation are working at snail’s pace to take effective and timely action to control emissions from their respective sectors. They have become devoid of ambition and determination to tackle climate change. Therefore, it is essential that the UNFCCC retains a role in ensuring that these sectors make a fair contribution to global emissions reductions efforts, as well as to generating revenue to address the impacts of their emissions. 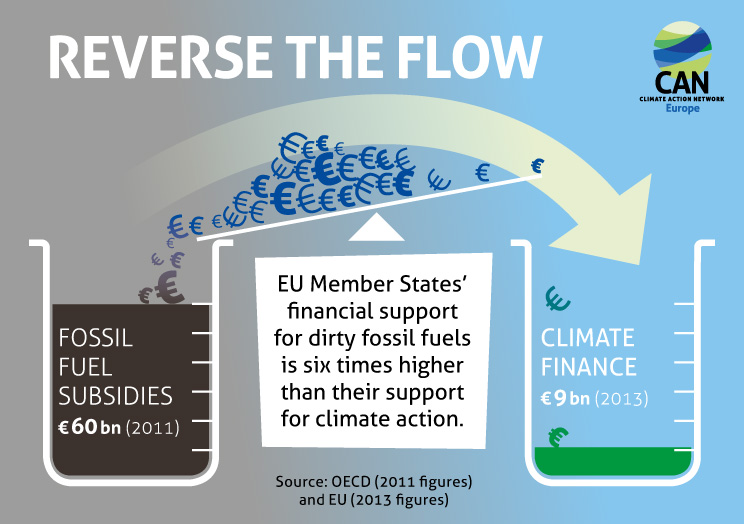 Despite several pledges to phase out fossil fuel subsidies, most developed countries are still heavily supporting polluting industries that have contributed to climate change. It is now time to reverse this support, and enhance action to stimulate climate resilience and fossil-free economies.

So a third solution we propose would be to reverse financial flows from high-carbon investments and fossil fuel projects towards low-carbon and climate resilient solutions, including climate finance.

The EU should be instrumental in shifting all public financial flows towards low-carbon and climate resilient development. In line with this European countries should work to ensure that all of our international finance is consistent with the 2°C goal, and keeping 1.5°C within reach, and is resilient to the impacts of climate change we cannot avoid.

In parallel, CAN Europe calls for the implementation of a global fossil fuel extraction levy (a “Carbon Majors Levy”) that would provide a new source of finance and ensure that the fossil fuel industry pays for the climate loss and damage that their products are causing. Initial estimates are that at a low level of 2 dollars per tonne of CO² the levy would raise approximately 50 billion dollars per year.

There is great potential for implementing sustainable, predictable and adequate support to developing countries. In fact, the 100 billion dollar pledge is just the beginning and is largely feasible. It depends only upon the political will of developed countries, including the EU and their understanding of the urgency to act. Just one month until the Paris climate summit, it’s high time that countries take bold, strong and innovative decisions that will guarantee a low-carbon, climate resilient future.

Gaétan Arnould is intern at CAN Europe

The case of the disappearing energy-intensive industries transition pathway

EU industrial strategy is in a period of frenetic activity, especially as EU industry is affected by multiple converging crises resulting in increased costs and supply chain provisioning difficulties. This