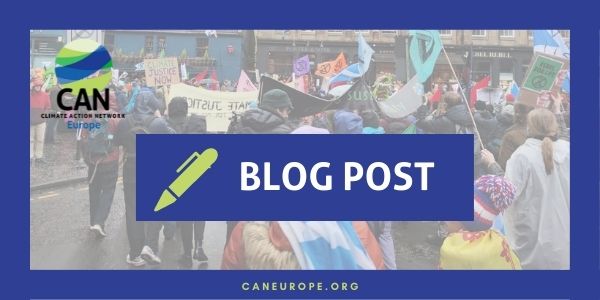 CAN Europe’s latest briefing shows there is only one way to ensure a fair and Paris compatible EU emission pathway – through significant improvements of key climate laws – the ETS and the ESR.

In order to avoid the worst impacts of the climate crisis, we need to make sure that the increase in global temperature does not exceed 1.5°C. This is a clear message from the scientific community and a central objective of the Paris Agreement. To get there, all nations need to drastically reduce their emissions, especially before 2030, as we are still alarmingly off track and the window to keep the 1.5°C target attainable is rapidly shrinking.

We all know why we have to act. In addition to ever more frequent extreme weather events and accumulating social, health and economic harm caused by aggravating temperature rise, the ongoing war in Ukraine is another shocking daily reminder that the EU needs to quickly transform in order to wean itself off any dependence on fossil fuels. The sooner, the better.

At this very moment, negotiations on the Fit For 55 package are in full swing, revising the EU’s climate and energy policies for 2030. The European Parliament and the Council need to improve the Commission’s proposals on key policies as they are insufficient to make this framework fit for reaching the  1.5°C climate target.

The current revisions are important as they will have a substantial impact on all economic sectors and peoples’ lives. They have  the potential to drive out fossil fuels much faster and empower citizens to gain access to decentralised, cheaper and clean energy and mobility.

The problem is clear

The EU’s new 2030 target of at least -55% emission reductions and the Commission proposals to revise key climate legislation however are not good enough. Europe, as a rich continent and a major historic emitter, has a special responsibility to contribute more than the global average.  However, the Commission proposals lead to an EU carbon budget that is twice the per capita carbon budget available.

This is where EU legislators have to act and further increase the ambition of key EU climate files. In particular, the overall climate target is implemented via two central pillars: the EU Emissions Trading System (ETS) and the Effort Sharing Regulation (ESR). Together these cover all emitting sectors and set specific targets and trajectories to reach the 2030 objective. The revisions based on the Commission’s proposal would only limit the EU’s carbon budget for the period 2021-2030 to 30.6 GtCO2e, again, far beyond its per capita share under a 1.5°C-consistent pathway. This is why the ambition of the ETS and the ESR need to be strengthened beyond the Commission proposal.

The ETS is Europe’s carbon market and covers EU emissions from the power, industry and aviation sectors. All installations covered need to purchase emission allowances. The overall number of allowances in the system is capped and decreases from year to year in a linear way to meet a specific target in 2030. The Commission has proposed to increase the ETS 2030 target from 43% emission cuts to 61% – compared to 2005 levels, leading to total ETS emissions of 11.8 GtCO2e for the period 2021-2030. The briefing attached discusses several options to increase the ambition of the ETS, notably by increasing the magnitude of rebasing the cap and increasing the linear reduction factor. These could lead to a much higher target for 2030, bringing the EU’s carbon budget closer to what can be considered a fair share of efforts, possibly reducing the ETS budget to 9.1 GtCO2e for the period 2021-2030.

CAN Europe is calling for the ETS to achieve at least 70% emission reductions by 2030.¹

The ESR covers emissions from road transport, buildings, waste, small industries, and non-CO2 emissions from agriculture – altogether approximately sixty percent of EU’s emissions. The revised ESR would aim at reducing those by 40% by 2030. To be in line with the 1.5 goal these emissions need to be cut by 50% (compared to 2005 levels). The end target is very important, but it is crucial to observe the pathway how we get there – in other words, how much emissions land in the atmosphere along the way.

If we stick to the current proposal, most member states will start with a significant surplus of allowances in the ESR. A revision of the emission allowances based on a linear reduction starting from the 2020 target or 2020 actual emissions (whichever is lower) would substantially reduce total allowed emissions that warm the climate.

In the attached briefing we compare 5 different reduction scenarios for ETS and ESR to the Commission’s ‘Fit for 55’ proposal.

While all of the improved scenarios result in EU carbon budgets well below what the European Commission is proposing, only two scenarios foresee the carbon budget to remain below a fair 5% share of the global carbon budget. 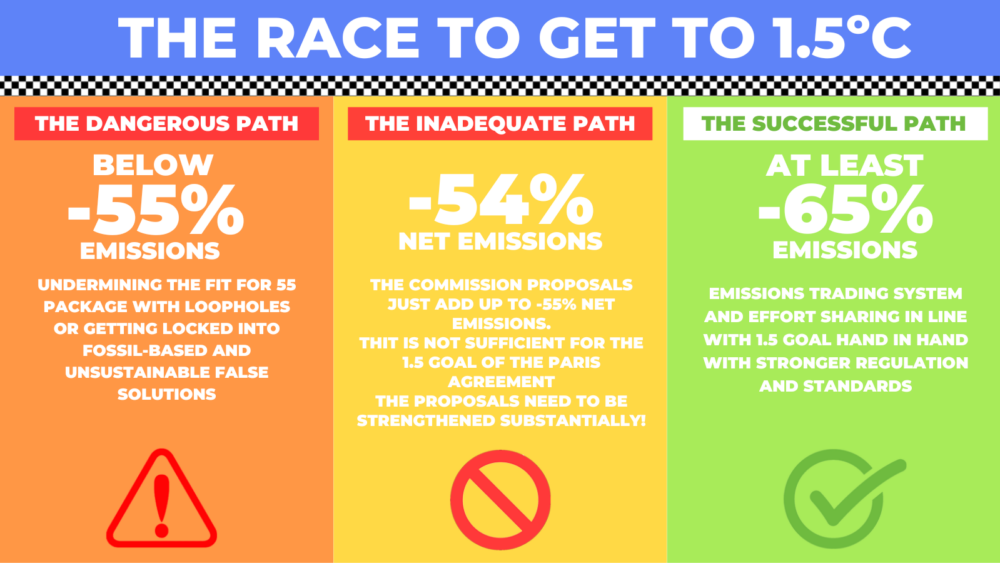