No more presents for polluters – Make the EU ETS work for the climate!

On 15 December, the European Parliament’s environment committee will cast a decisive vote on the revision of the EU Emissions Trading System (EU ETS).

Climate Action Network (CAN) Europe, Carbon Market Watch, WWF and almost 100 000 European citizens in the WeMove.EU community urge the committee members to vote for a bold reform to turn the EU ETS into an effective climate protection tool and make the polluting industries and power producers pick up the tab for the harm they cause.

In particular, they call on the MEPs to push for faster reduction of emissions, aligning the starting point with real emission levels, much more ambitious targets, regular scaling-up of ambition and permanent cancellation of the surplus pollution permits.

*** Print quality images from the media stunt organized by the NGOs on 7 December available at: https://www.flickr.com/photos/caneurope/albums/72157673634177823 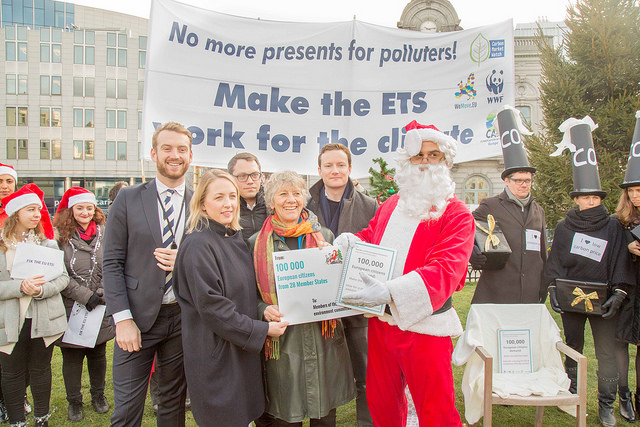 “With the current low price on carbon, polluting industries are getting a free ride to pollute at the expense of EU citizens. MEPs need to vote for an ambitious reform of the ETS to make the polluters pay the full price for the damage their activities bring to our climate, health and environment. The European Parliament needs to ensure that the reform of the ETS turns it into a strong climate protection instrument that delivers emission reductions in line with the Paris Agreement.”

“Meaningful improvements to strengthen the EU carbon market are long overdue. Responsible policymakers in the European Parliament should agree on amendments to reduce carbon pollution faster and more effectively than initially proposed by the EU Commission. Our common priority to limit global warming cannot be traded off against short-termism and vested economic interests. Now is the moment to prove that Europe’s carbon market can create benefits for people and planet.”

“The EU ETS is supposed to make polluters pay and drive low-carbon investments, but it is doing the exact opposite. As a result, heavily polluting businesses have made billions of euros from the EU ETS, while support for innovative industry frontrunners has been only a fraction of this. The Parliament now has the opportunity to tilt the balance in favor of green innovators by overhauling the free allocation rules and boosting the Innovation Fund.”

“Close to 100,000 citizens from all 28 EU member states signed the petition to urge the Members of the European Parliament to vote for an ambitious reform of the EU ETS, proving that European policies on fighting climate change matter a great deal to their electorate. It is high time our parliamentarians listened to the voices of the citizens over the big business lobbyists, and made EU’s key climate policy work for people and the climate.”

[1] A petition calling on MEPs to support ambitious reform of the ETS, launched by CAN Europe, Sandbag, Carbon Market Watch, WWF, Oxfam and WeMove.EU has been signed by nearly 100 000 citizens: https://act.wemove.eu/campaigns/ETS