Open Letter – Europe Off Gas for Peace and Prosperity

We express our full solidarity with the people of Ukraine. The Russian invasion of Ukraine has unleashed a terrible humanitarian crisis. An immediate end to the conflict and a safe and peaceful future for all must be the priority right now. Given the role that fossil fuels play in this war and in the global energy price crisis, we urge you, as European leaders, to accelerate the transition away from imported Russian fossi fuels – and from all fossil fuels.

More than ever before, Europe’s energy transition is now a peace project. Now is the crucial moment to make the right decisions in responding to the crisis. Building more fossil fuel infrastructure risks channelling further billions into the pockets of the same industry that has lobbied against energy savings and renewable energy policies for decades, keeping Europe hooked on fossil fuel imports. Gas companies have profited enormously from the energy price crisis and are seeking to profit further from the war.

Diversification away from fossil fuels, not diversification of gas supplies. Europe’s mainresponse to the gas crises of 2006 and 2009 has been a policy of supply diversification. This policy has failed. The share of Russian gas imports has steadily increased since 2013, while gas has overtaken coal to become the second largest source of carbon emissions in Europe. Further expansions in European fossil gas pipelines and LNG infrastructure, which will take years to be operational, would deepen Europe’s import dependency and only serve to increase our reliance on volatile global gas markets, while exacerbating the climate crisis. As long as Europe remains reliant on global gas markets, we will always be at the whim of powerful, gas-exporting countries that are willing to weaponize their resources. Instead of swapping fossil fuel imports from Russia with imports from other countries, we must prioritise a swift transition away from all fossil fuels Europe consumes.

Fossil gas means climate chaos. The role of fossil fuels in exacerbating crises doesn’t end with war. The latest IPCC report is another stark reminder of the significant harms from climate change already underway for decades which impact communities around the globe, including rising sea levels, floods, drought, storms, wildfires and famine. More investment in fossil fuels and related infrastructure will increase drilling and fracking and only serve to worsen these impacts. Numerous studies have shown that any new investment in fossil fuel supply will put the 1.5C target of the Paris Agreement out of reach.

Fossil gas means energy poverty. The energy price crisis is felt disproportionately by low and moderate income households, many of which are locked into fossil gas dependence in their homes. With energy prices looking likely to remain volatile for years to come, locking Europe into gas will mean locking Europeans into energy poverty. Europe needs an emergency plan to cut gas consumption before next winter, put in place the policies, supply chains and financial instruments to achieve deeper cuts by 2025 and seek to radically increase the ambition of all relevant legislation currently under discussion. This should be done while taking all necessary measures to support vulnerable households from higher energy prices.

The emergency plan should include grants and technical support to rapidly insulate homes and buildings which would achieve the fastest demand cuts and to accelerate the replacement of gas boilers with renewable heating solutions like heat pumps. Rooftop solar could be mandated on all appropriate roofs and shovel-ready renewable projects accelerated. Governments should ban the installation of gas boilers and end investments in expanding fossil gas infrastructure.

The plan to 2025 should include investments in the supply chains for energy renovations and renewables, including the construction of factories in Europe for this aim. The issues around permitting of renewable energy projects should be resolved while ensuring high environmental standards. Europe should roll out training programmes to ensure the necessary skilled workers.

Finally, Europe should create the necessary framework to phase out all fossil fuels, and, within this, to phase out fossil gas in the EU by 2035. This means a full re-evaluation of current files under discussion within the ongoing negotiation process, including the Energy Performance of Buildings Directive, the Energy Efficiency Directive, the Renewable Energy Directive, the Emission Trading Scheme (ETS), both the Gas Directive and the Gas Regulation, the Regulation on Methane Emissions reduction and further Projects of Common Interest (PCI) lists. The current proposals for these files fall dramatically short of what is needed to end Europe’s dependency on fossil fuels. For climate reasons and for the security of our people, we need to rid ourselves of our dependence on fossil fuels. The mission for peace, security and democracy in Europe depends on you. Fossil fuel dependence must end: a cleaner, safer future is in your hands. 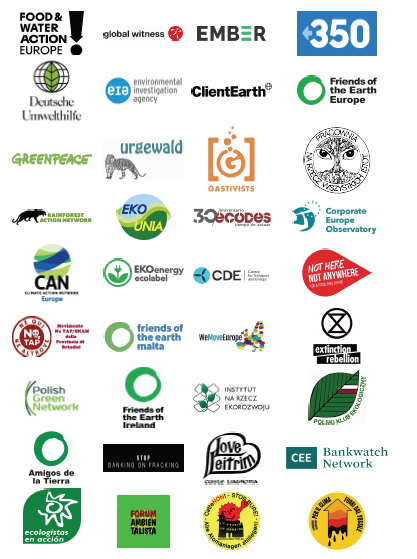 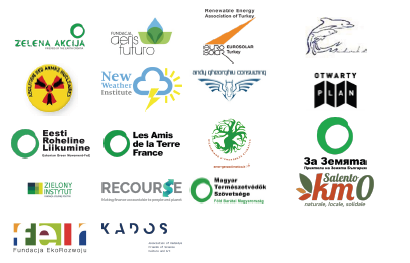 Centre for Transport and Energy Czechia

Friends of the Earth Europe Europe

National Society of Conservationists – Friends of the Earth

Not Here Not Anywhere Ireland

Friends of the Earth Ireland Ireland

Friends of the Earth Malta Malta