This policy briefing builds on CAN Europe’s recommendations for an accelerated, secure and Paris compatible energy transition in the context of the invasion of Ukraine  by further detailing measures to mobilise EU financial instruments and policies to accelerate the phase out of the EU’s dependence on fossil fuels.

Furthermore, on 23 March 2022 CAN Europe sent a letter to the Finance Ministers of EU Member States and the European Commissioners urging them to take measures to finance the acceleration of the energy transition in light of the war in Ukraine.

As both the European Commission and Member States are devising plans to cut the EU’s dependence on fossil fuels imports from Russia, failing to substantially accelerate the just energy transition could mean a zero-sum game: coal, oil and gas imports from Russia would be replaced with dirty imports from elsewhere. Indeed, for all its merits on ramping up renewable energy and efficiency targets, the Commission’s RepowerEU plan still relies to some extent on LNG imports and fossil gas based hydrogen.

If we are serious about cutting our dependence on all fossil fuel imports, nothing short of a colossal mobilisation of resources would be needed to both frontload and increase investments in the energy transition. However, the RepowerEU communication is extremely thin on content when it comes to finance and EU funds, beyond some general references to existing EU instruments. The Commission is expected to propose an action plan in May 2022 for operationalising the REPowerEU Communication, already published in March. This is a unique chance to put forward an adequate roadmap that can mobilise all financial instruments to increase energy independence and accelerate a Paris-compatible just energy transition in tandem.

A sober look at the scale of the problem is crucial: even prior to the Russian invasion of Ukraine the “investment gap” for reaching the EU’s 2030 emissions reduction targets was already significant. For example, according to a report of Agora Energiewende and Climate & Company, the entirety of EU funds (including the Next Generation EU package) could be expected to mobilise approximately €670 billion for the period 2021-27, assuming that the funds are well utilised. This contrasts with public and private investment needs of €2.4 trillion over the same period, to reach a 55% emissions reduction target by 2030.

Given the large investment gap to deliver emissions reduction, and the urgency to shrink the EU’s fossil fuel dependence faster, reforming existing funding instruments and introducing new instruments is imperative. Further, a significant proportion of energy transition investments currently planned until 2027 will need to be frontloaded if we are to respond to the short-term impacts of the current crisis without simply shifting our energy imports from Russia with fossil fuel imports from elsewhere.

Hence the urgency of evaluating what it will take to phase out the EU’s dependence on imported fossil fuels, looking at key short-term and medium-term measures that the European Commission and Member States could take to significantly front-load and accelerate investments in the energy transition.

In this briefing, we provide an overview of selected measures and reforms that could be part of the upcoming plan announced by the European Commission in its REPowerEU Communication. The briefing includes proposals for:

Assessing the EU’s proposals to boost a green industry

On February 1st 2023, the European Commission is expected to propose a 4 pillar response to the US’ Inflation Reduction Act (IRA), which will be discussed at the upcoming 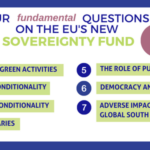 In reaction to the Inflation Reduction Act in the United States (IRA), the European Commission announced an upcoming Net Zero Industry Act and a loosening of the State aid 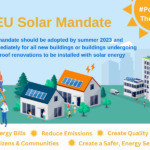 Now more than ever, there is a strong public demand within EU countries to embrace a solar revolution. As national governments are now scrambling to secure alternative energy