The Romanian government’s proposal for CE Oltenia’s restructuring is a test for the European Commission’s commitment to aligning state aid with the European Green Deal. Approving CE Oltenia’s current restructuring plan would lock Romania into fossil fuels for decades and hinder a meaningful just transition plan for the communities in Gorj County. 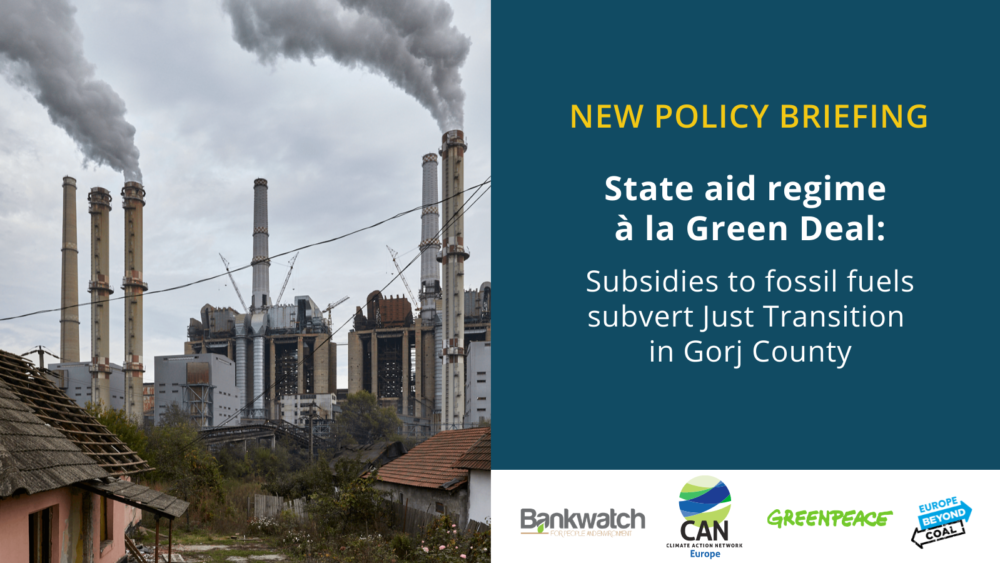 • Due to financial difficulties in paying for carbon permits and paying back a rescue aid, a Romanian electricity utility – CE Oltenia, drafted a restructuring plan to access state aid in order to continue its operations;

• CE Oltenia’s proposed restructuring plan financed by state aid supports coal-based energy beyond 2030 while creating new fossil gas assets. It extends Romania’s dependence on fossil fuels, leads to a 28% increase in greenhouse gas emissions by 2030 and hinders the transition of the Gorj County;

• Public money should never pay for carbon permits – because it would mean that citizens are paying for the pollution, instead of the polluters doing so;

• In the CE Oltenia case, DG Competition has an opportunity to prove that it intends to align the new state aid regime with the European Green Deal, and implement the long-lasting objective to phase out fossil fuel subsidies by conditioning the aid to a decarbonised restructuring of the company.

Complexul Energetic Oltenia (CE Oltenia), a Romanian state-owned electricity company that produces 90% of the country’s coal-fired electricity and operates all lignite mines, has been experiencing financial difficulties since about 2014. Coal power production has become so uneconomic that CE Oltenia has only been able to pay for its own Emission Trading Scheme (ETS) allowances thanks to substantial injections of public funding, including a government rescue loan of €251 million approved by the Commission in 2020.

The company is now at a crossroads. Either it restructures or goes bankrupt. This is also a turning point for Romania’s energy mix. The Romanian government promised a €1.3 billion in state aid to support the restructuring of the company, but the European Commission needs to authorise it first. Critically, that aid can either contribute to a Paris-climate-agreement-compatible coal phaseout and let Romania leapfrog from coal to a clean energy future or increase emissions while leaving communities stuck with coal and fossil gas – another dead-end solution they would pay for (with their wallets and health).

What is at stake?

The company’s official restructuring plan does not foresee a coal phaseout – five coal units would still be operating in 2030, without suggesting any closure dates. Moreover, an expansion of fossil fuel assets is foreseen with two new gas units becoming operational from 2026, while solar PV would represent a mere 6% of the company’s total energy supply by 2030. In other words, the potential €1.3 billion state aid aims to allow CE Oltenia to continue operating 1950 MW of lignite-based power generation and heating beyond 2030, while relying on fossil fuels for about 94% of its capacity. This plan would cause a cumulative increase of the utility’s CO2 emissions which is a clear contradiction to the European Green Deal objectives (including the one of phasing out of fossil fuel subsidies) and the EU’s 2030 climate targets.

This puts the future of Romanian lignite region, Gorj County, as well as the country’s coal phase-out pathway at stake.

The Commission’s position about state aid for restructuring will give a strong signal for the future of the region. If the current plan is approved, the region will be stuck with coal beyond 2030, and will then shift to fossil gas, which will follow coal in becoming a stranded asset. This would leave the region in socio-economic and financial turmoil with a significant climate footprint. However, if a new restructuring plan with a fossil-free future is on the table, the region can finally unlock its renewables and energy efficiency potential, and plan a pathway to increase the wellbeing of communities – including new green and decent jobs.

In February 2021, the European Commission opened an in-depth investigation into CE Oltenia’s restructuring plan, doubting its compatibility with the internal market in light of the Rescue and Restructuring State aid Guidelines. The Commission questions in particular: company’s low contribution to its own restructuring costs (42% when 50% is required); the absence of financial support from the company’s private shareholders; long-term viability of the new business plan – in light of the rising price for carbon permits; and the absence of significant assets divestment (that is, of assets that actually have a market value). The global aid of €1.3 billion for restructuring includes a €241.4 million grant for paying the company’s Emission Trading Scheme (ETS) allowances for 2020, which was already paid in April 2021. The latter should arguably be treated as an operating aid. A grant to help pay ETS allowances is not a restructuring measure and contradicts the polluter pays principle, thus it should not be admissible in any circumstances – a point that the Commission missed in its opening decision.

Although the Commission’s preliminary analysis does not explicitly refer to the Green Deal, to climate policies nor to the necessity to move away from fossil fuel-based energy production, we argue that these considerations must guide the final decision on the compatibility of State aid with the internal market as they are already driving market forces.

If the competition arm of the Commission is serious about a new state aid regime that is aligned with the European Green Deal, as claimed since 2020, and about implementing the long-lasting objective to phase out fossil fuel subsidies, this case presents an invaluable opportunity to require a decarbonised restructuring of the company as a condition for the state aid. This approach can complement other EU funding instruments that Romania can use to move beyond fossil fuel-based energy production and encourage the country to put necessary regulation in place to attract renewable investments. EU and national financial resources must be allocated to socially, environmentally and economically sustainable uses that are meaningful in the European Green Deal framework – this includes ensuring that affected communities in coal regions are supported for a just transition to low-carbon local economies.

ROLE OF THE EUROPEAN COMMISSION IN GOOD GOVERNANCE 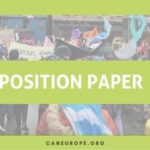