The US unveils its pledge for Paris climate talks

The US contribution to the Paris climate agreement, filed within the agreed deadline today, should provide impetus for global efforts to tackle climate change, according to Climate Action Network Europe.

The US climate action commitment towards the Paris agreement announced today reiterates its emission reductions target from last year: 28% below 2005 levels by 2025 [1].

The timely pledge from the US, the second largest emitter globally and a laggard in climate action so far, should add momentum for more climate action around the world. We need other major emitters such as China, Japan or Australia to join the race to set climate targets – Wendel Trio, Director of Climate Action Network Europe said.

The commitments tabled so far move us forward, but governments need to treat the climate crisis with more urgency and seriousness. Both the US and the EU have to scale up their pledges to be in line with a pathway to phasing out fossil fuels by 2050 and keeping temperature rise well below the agreed threshold of two degrees Celsius – Trio added.

A new report from the NewClimate Institute, commissioned by Climate Action Network and the Global Call for Climate Action and published today, shows the benefits of scaling up climate commitments to a trajectory which would phase out the use of fossil fuels and lead to a complete switch to renewable energy by 2050.

If the EU’s 2030 climate target was scaled up to deliver an economy powered fully by renewables by mid-century, already by 2030 it would secure around 420,000 new jobs in renewable energy sector, and prevent around 46,000 people from dying prematurely due to excessive exposure to air pollution each year. The EU would also save EUR160 billion annually thanks to reduced fossil fuel imports.

There are numerous ways the EU could ratchet up its ambition for climate action, from immediate steps to phase out harmful and outdated fossil fuels, to prioritising the deployment of renewables and the reduction in energy demand. Raising the EU’s climate targets would spur green job creation and innovation, reduce energy costs and dependency and mitigate health problems related to air pollution. Delays and doing the minimum equals missed opportunities – Trio adds.

The report presents benefits of enhanced climate action also for the US and China. If the US strengthened its climate pledge to meet a 2°C compatible trajectory, by 2030 it could save USD160 billion each year from reduced oil imports in the transport sector, prevent 20,000 premature deaths each year from air pollution and create 180,000 full-time equivalent green jobs in the domestic renewable energy sector. 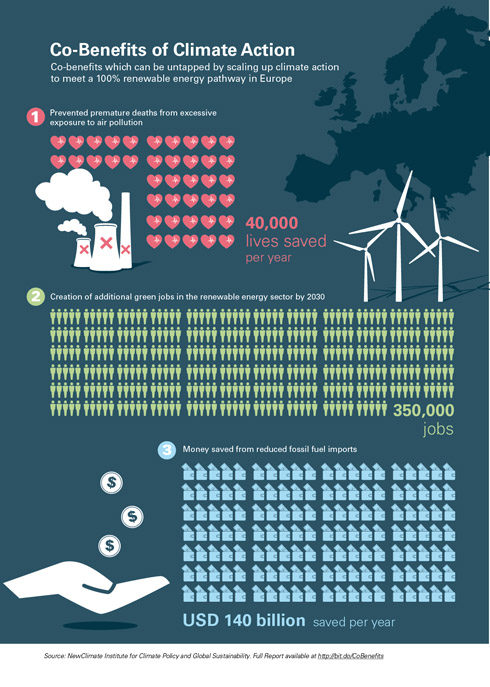 [1] The US target equals to 16% reductions below 1990 levels and is far lower than the EU’s pledge to reduce emissions by at least 40% domestically by 2030. However, when comparing annual reductions, the US target is more ambitious after 2020. It plans to reduce emissions by 2% every year, whereas the EU will cut them by approximately 1,5%, depending on the level of real emission cuts the EU will be at in 2020.

Climate Action Network (CAN) Europe is Europe’s largest coalition working on climate and energy issues. With over 120 member organisations in 30 European countries, CAN Europe works to prevent dangerous climate change and promote sustainable energy and environment policy in Europe.