Why adjusting the Starting Point in the ESR is important

While a lot of attention in the negotiations about the Effort Sharing Regulation (ESR) in the coming year will go to which target will be given to each Member State for 2030, the ESR will in fact consist of a ten year carbon budget for each Member State for the period 2021 to 2030. The total amount of polluting greenhouse gases that each country will be allowed to emit in the period 2021 to 2030 will be determined equally by the emissions level set for the starting point in 2021 as by the 2030 target. In other words, 1% more emissions at the starting point has the same effect on the EU’s emission budget as decreasing the 2030 target by 1%. The lower the starting point in 2021 the more emissions reductions will be achieved in the ESR until 2030.

What are the options for the starting point? 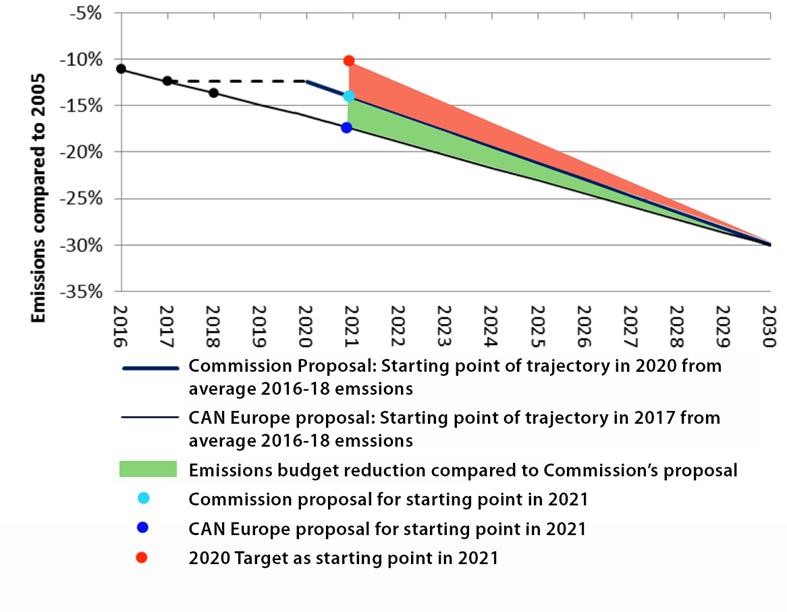 In addition, for those countries for whom this trajectory would lead to an emissions level in 2020 which is above their 2020 target (hence for those countries that are to miss their 2020 target), the starting point in 2021 should be defined on the basis of a trajectory from their target in 2020 (meaning that their emissions in 2021 should be lower than in 2020).

What do the Parliament and Member States think?

In the Council, Member States are also currently discussing the proposal. Germany is calling to strengthen the starting point, whereas voices to weaken the starting point include Bulgaria, Latvia, Lithuania and Romania as well as Poland. As shown in the table below, the Polish proposal would significantly increase the emissions allowed in the ESR until 2030. This is because the Polish proposal combines the two worst options, namely that all Member States should have their 2020 target as a starting level and that the starting year of the trajectory should be 2021. As shown in the table below, such a proposal increases emissions with almost 1 billion tonnes. The difference, in fact, between the best option and the worst option is more than 7%, and equal to almost 1.6 billion tonnes.

Adjusting the starting point alone will not align the ESR with the Paris Agreement.

Read more in the briefing: CAN Europe No cheating from the start 13072016

And in this briefing by Transport and Environment

The European Year of Youth: we all CAN (and have to) connect with youth

Overwhelmed, scared, exhausted, anxious, drained, hopeless, depressed. This is just a glimpse of how youth feels today. And it’s no surprise why: current generations are faced with a socio-economic system