New infographic published by Climate Action Network (CAN) Europe today shows the huge discrepancy between what companies have to pay for carbon pollution under the EU Emission Trading Scheme (ETS) and how much it costs EU citizens.

CAN Europe urges Members of the European Parliament’s industry committee (ITRE), voting on the reform of the ETS on 13 October, to substantially cut the supply of carbon pollution permits to lift their price. 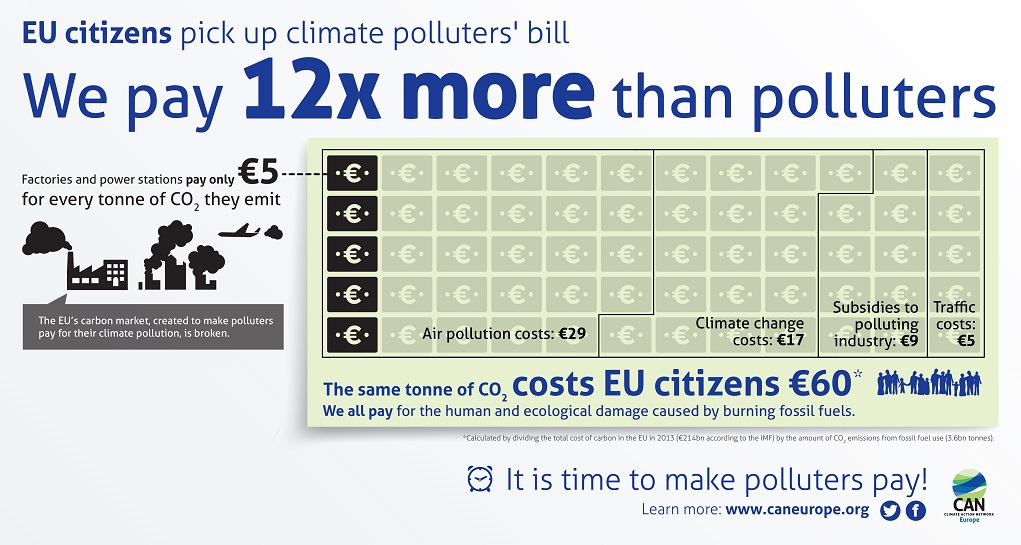 “Damaging the climate is extremely cheap for Europe’s factories and power stations” – Wendel Trio, Director of CAN Europe said. “With current prices of climate pollution being 12 times lower than actual costs, EU citizens are being left to pick up the tab for polluting companies.”

The current carbon price under the ETS is much too low to drive a shift away from fossil fuels to more energy efficiency and renewables. The reforms proposed by the European Commission will not increase prices much above EUR10 for many years to come, making the ETS irrelevant for the efforts to limit temperature rise to 1.5°C in line with the Paris Agreement.

As the price will raise when permits become scarce, CAN Europe calls upon Members of the European Parliament to vote for tightening of the supply in the system via:

In the draft compromise that will be subject to the committee’s vote, ITRE puts off confronting the failure of the ETS to drive adequate emission cuts. If passed, the compromise would kick the can down the road to the environment committee to make the ETS truly fit for purpose.

[2] CAN Europe’s statement on the draft compromise: https://caneurope.org/publications/press-releases/1233-parliament-s-industry-committee-closer-to-a-compromise-on-the-eu-ets-reform

[3] A petition calling on MEPs to support ambitious reform of the ETS, launched by CAN Europe, Sandbag, Carbon Market Watch and WeMove.EU has been signed by over 50 000 citizens in just one week: https://act.wemove.eu/campaigns/ETS

[4] CAN Europe’s briefing paper “A fresh start for the ETS”: https://caneurope.org/publications/reports-and-briefings/1223-can-europe-briefing-a-fresh-start-for-the-ets

[5] Open letter to the ITRE Committee on coal subsidies through EU ETS: https://caneurope.org/publications/letters-to-policy-makers/1230-open-letter-to-the-itre-committee-on-coal-subsidies-through-eu-ets

[6] In the process to reform the EU ETS, the industry committee of the Parliament shares some competence with the environment committee, which leads the work on the file.

[7] The next important moments in the reform of the EU Emissions Trading System (ETS) will be the votes in the European Parliament’s ITRE and ENVI Committees on 13 October and 8 December, as well as a debate of the EU’s Environment Ministers on 19 December 2016.

Climate Action Network (CAN) Europe is Europe’s largest coalition working on climate and energy issues. With over 130 member organisations in more than 30 European countries – representing over 44 million citizens – CAN Europe works to prevent dangerous climate change and promote sustainable climate and energy policy in Europe.