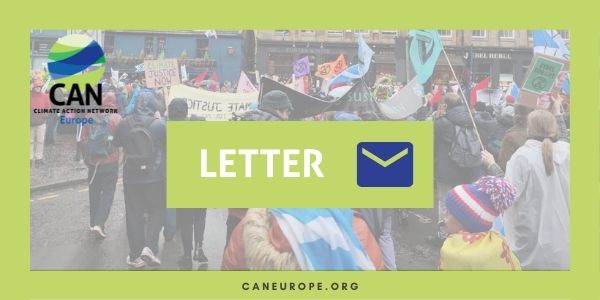 Dear Member of the European Parliament,

We write to you to express our grave concern about the European Commission’s proposal to generate EUR 20 billion from the auctioning of allowances held in the Market Stability Reserve (MSR) of the EU Emissions Trading System (ETS) in order to finance measures under the REPowerEU plan, including gas and oil infrastructure.

We urge you to do everything in your power to block this proposal as it would severely undermine the objectives of the European Green Deal and the EU’s obligations under the Paris Agreement, as it would have severe detrimental impacts on the EU ETS and its ability to reduce emissions:

–  Releasing 200-250 million allowances from the reserve which otherwise would have been cancelled means allowing for the release of an equal amount of additional emissions into the atmosphere, reversing important efforts to strengthen the ambition of the ETS in light of its instrumental role to combat the aggravating climate crisis;

–  The revenue generated would contribute to a EUR 225 billion portfolio dedicated to finance measures proposed under the REPowerEU plan. It is expected that EUR 11.5 billion will be used as investments in fossil gas and oil infrastructure which means cementing an unacceptable lock-in into fossil infrastructure for the next decades;

–  Allowing the generated revenue to be used inter alia for fossil gas and oil infrastructure funding is in blatant contradiction to the objectives of the MSR and the ETS and the Commission’s own revision proposals to strengthen the criteria for revenue use, currently discussed in the negotiations under the Fit For 55 package;

–  The decision to politically interfere into the market with the primary objective to generate extra funding would set a dangerous precedent and fundamentally undermine the credibility of the carbon market. EUA prices already dropped in response to the Commission’s amendment proposal by -12.5%. ¹ Such impacts also reduce the overall revenue envelope for Member States generated by the EU ETS, thus only exacerbating the EUR 2,4 trillion investment gap for reaching the EU’s climate targets and financing the energy transition;

In light of the above, we deem this proposal as fundamentally flawed, incompatible with underlying legal principles of EU climate law² and backsliding on the EU’s commitments under the Paris Agreement. Therefore, we call on you to reject this proposal from moving forward, as it is not only undermining our long term objective of reaching sustainable energy security, but also in direct contradiction to the primary objective of the European Green Deal and limiting temperature increase to 1.5°C, and to support steps to mobilise alternative funding for the required measures in a way that does not undermine core EU climate policy.

We remain at your disposal for any further exchange.

² These echo in part our concerns about the treatment of fossil gas in the EU taxonomy, for further detail see this note prepared by ClientEarth