Showing the Energy Charter Treaty the door - CAN Europe

“This proposal would make a dangerous treaty even more dangerous. It would continue to allow coal, gas and oil corporations to extract compensation from governments if they pursue Paris-compatible policies to phase-out fossil fuels. To make things worse, the Commission intends to expand the dangerous investment protection provisions of the treaty to hydrogen and biomass – neither of which is clean per se nor is their contribution to the clean energy transition proven. Why set a new trap for policy makers if you haven’t found the way out of the existing one?” – Trade And Climate Project Manager, Cornelia Maarfield. 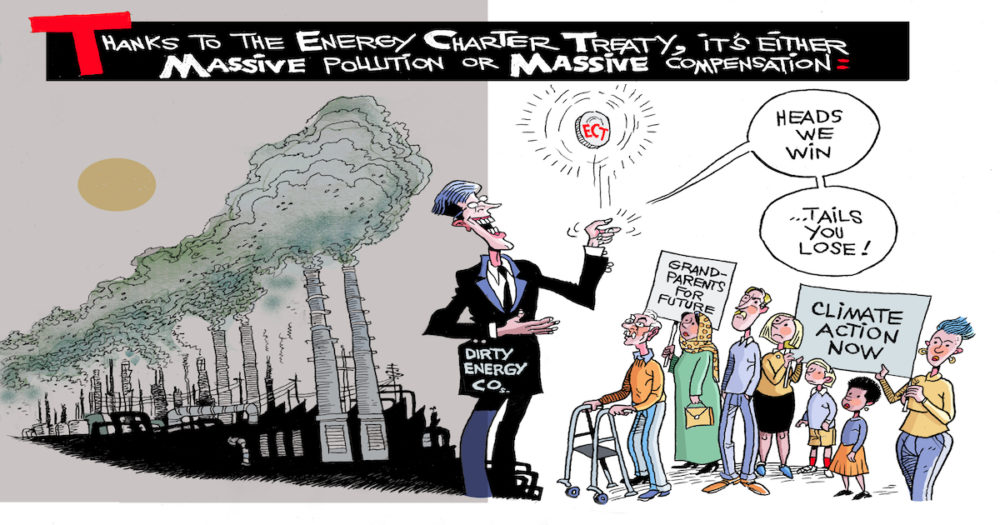 The Energy Charter Treaty (ECT) protects foreign investments in the energy sector and can be used by fossil fuel firms to sue against climate policies that harm their profits. Our campaign to end the ECT is showing early results.

Most people do not know about the ECT or its adverse effects on the clean energy transition. The focus of our work was therefore on media, advocacy for EU decision-makers and on building coalitions with other civil society partners.

We coordinated an open letter from climate leaders and scientists speaking out against the ECT signed by 200 high-profile people including Connie Hedegaard, Olivier de Schutter, Thomas Piketty, Sandrine Dixson-Declève and Jean-Pascal van Ypersele. Shortly after the letter was released, both France and Spain made public statements supporting their withdrawal from the ECT. We will pressurise other countries to join this emerging alliance, so that the Charter can no longer constitute an obstacle to ambitious climate policies.