Postcards from the Mediterranean in flames

We have been working to fight dangerous levels of climate change for many years, speaking of #OurHomeOnFire -meaning the Planet. It is still hard to believe that we are actual victims of real fires and seeing our home -where we eat, sleep, grow, collect memories- actually covered in flames.

We are devastated to see that “the state of emergency” has mutated almost to a new state of mind, another new normal added to the COVID-19 pandemic one. How many more natural disasters caused by climate change need to happen before we understand that there is no greater emergency, than the climate one? The climate crisis is here and happening now, to all of us.

The recent IPCC 6th Assessment Report makes it clear that the European Mediterranean will continue to experience these kind of extreme weather events that lead to catastrophic outcomes like the wildfires we are currently witnessing. It also states that if we act now we can still avoid the situation getting even worse by limiting the global temperature increase to 1.5℃, and that every fraction of a degree matters very much. In practice, this means that we need to substantially reduce emissions, and that we need to ditch fossil fuels now. European governments have no arguments to continue supporting any kind of extraction and burning of fossil fuels – not even for a little while longer. We need well-informed and educated decision makers to adopt local, regional and national adaptation strategies. People deserve being informed and well-prepared, well-organised for the climate crisis.

Life as we know it is changing everywhere. The much praised Mediterranean way of life is on the verge of disappearing, and below are the postcards of this year’s summer from our hometowns. Postcards we wish we didn’t have to post. 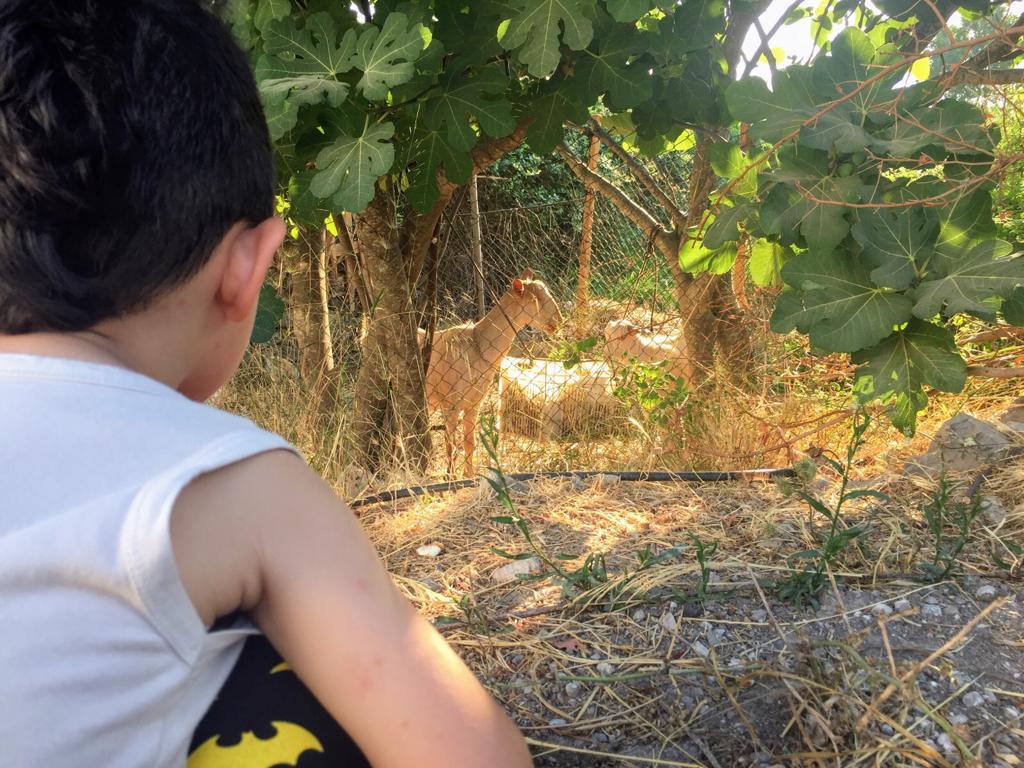 Muğla, Turkey – It was 44℃. I was asking him to put a hat on every single time he went out. He didn’t want to wear it because it was too hot to cover any part of his body. I made it into a game: put the hat in the sun, take it immediately off in the shade. He liked it. One step in the shade and here goes the hat off. When you’re 2.5 years old, everything is supposed to be a game.

The next day I saw 48℃ on the thermometer that was hanging on the outer wall of the house. It was getting hard to keep treating it as a game. A hat wouldn’t do much. My face felt like it was melting the moment I stepped out – shade or not. We couldn’t take him to the seaside, nor to the park anymore. It was his summer holiday at grandma’s village in Turkey and things were not as they used to. Things were not going according to our plans and memories.

We soon started hearing about the fires. From Antalya, at the Southern Mediterranean Coast. We had forest fires before but nothing like this. There is no word for a ‘wildfire’ in Turkish language. Probably that’s why everyone was speechless. It was impossible to put this fire out. We slept through that night only to wake up to the news that those nothing-like-before types of fires started all over the country.

When I saw 49℃ on the thermometer, my level of anxiety hit the roof.  Everything was very (very!) dry out there, and the burning wind was like a strong hair dryer blowing on our faces from all directions. When I woke up in the morning, the first thing I did was to check out the forest: it all felt extremely fragile. I watered  the bushes around our place. It felt like a pathetic attempt. This is a pine forest, I kept telling myself. A pine cone is what people use to start a barbecue around here. We were at a massive-scale barbecue.

Wildfires had spread all around. We started seeing smoke from over the mountains. People were shocked, sad. Loss of lives, homes, ecosystems, jobs, livestock, beehives. Everyone was in a rage, looking for someone to blame. Who are the arsonists? Who did it to us? People were swearing at “those who started it”. But who did? Many conspiracy theories started circulating. But it was getting harder to find someone to blame.

I had spent quite a bit of time in Muğla’s coal region when writing the Costs of Coal: Muğla report, and I remember seeing coal burning on its own in the open-cast mines on really hot days. Those hot days were not as hot as the hot days we were going through now, though. And then it happened – one of the three coal plants in the region actually caught fire. A twist of fate! These plants were supposed to stop operating due failure to abide by the Turkish environmental law; they were running with inadequate abatement equipment. Yet they were not closed. Despite the immediate presence of an illegally operating, climate killer coal plant burning, people were still looking for someone to blame for starting the wildfires. In the meantime, multinational oil companies were performing well in their greenwashing by paying for the fuel of fire extinguishers.

One day we were woken up by the smoke sneaking into our bedroom. We decided not to stay in Muğla anymore with our toddler, and travelled to our hometown. My mother stayed. She told us this was where she called home, that she couldn’t imagine leaving her home to its fate in the middle of the forest, and leaving other villagers alone. That morning she packed some of the family albums, looked at old photos with her grandson, and gave them to me to keep safe.

Postcard from the BALKANS

Pristina – Skopje – Tirana- Podgorica: A familiar tune on the radio shook  me from the slumber. I took a sip of water from my nightstand, and as I saw the sweat imprint  on the bed sheet I thought: how appropriate! – referring to the Rammstein song “Mein Herz Brennt” playing on the radio. Anyone who knows some basic German words could understand. Maybe a bit cheesy, but “My Heart Burns” was indeed appropriate after listening to the daily news on the fires throughout the Balkans peninsula.

Instead of exchanging holiday pictures with my friends and colleagues from the region. I was exchanging texts, hoping to hear that they were safe and sound. Fires in Kosovo, Serbia, Bosnia and Herzegovina, North Macedonia, Bulgaria, Albania, Montenegro, and the most devastating ones in Greece and Turkey. “A number of active fires, thousands of hectares burnt, this many households affected, many citizens evacuated…” 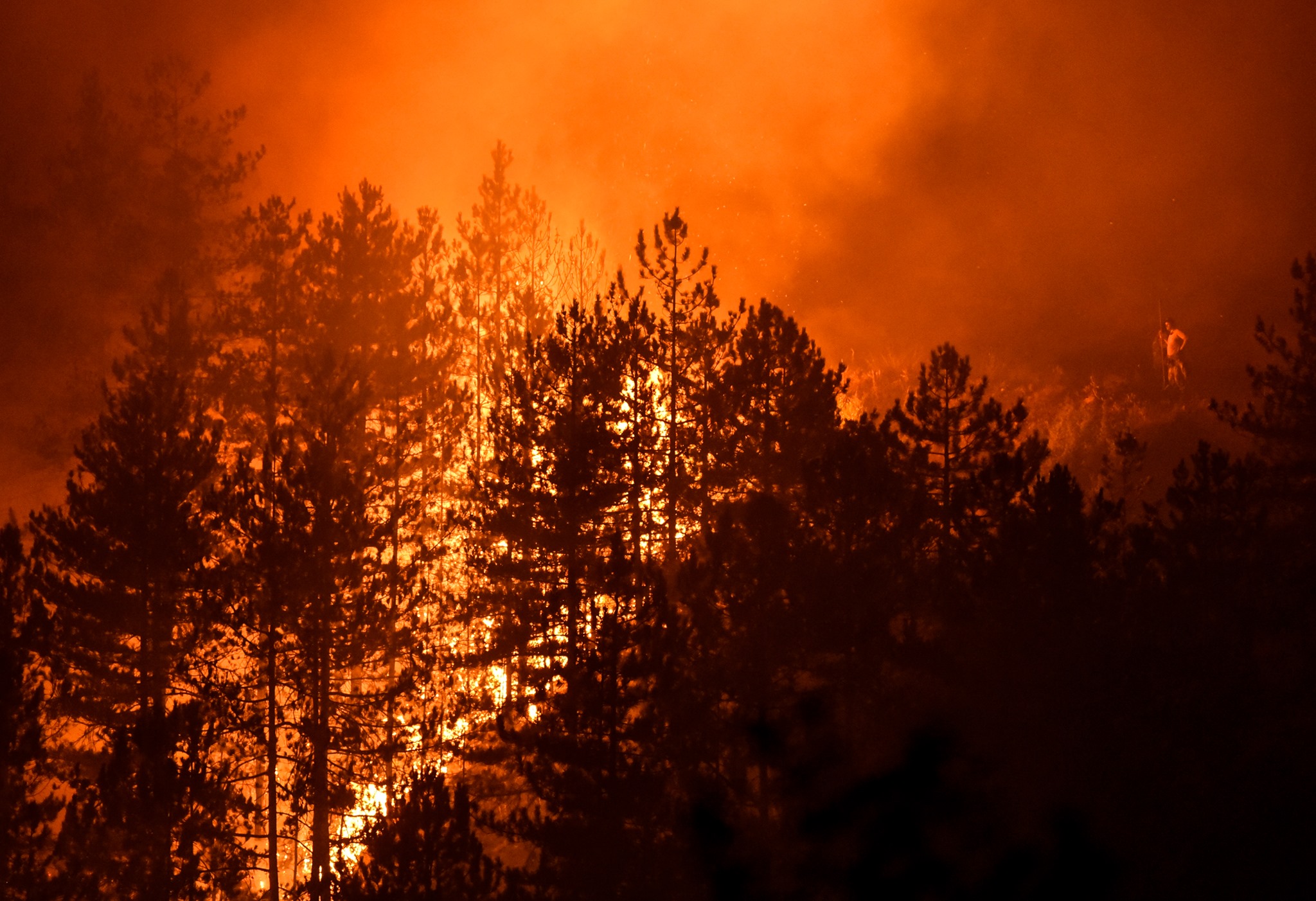 An apocalyptic summer – as of June I found myself using this phrase to explain to my friends, colleagues abroad how it felt living in the Balkan peninsula for the past few months.

The sky lost its usual shade of blue; looking at the distance the landscapes seemed foreign, not-belonging, desert-like. When beyond 35 degrees became the new normal for weeks, I found myself wondering – how do plants survive? All my sympathy and love went to the trees and the forests embellishing the surrounding mountains, like a green oasis in a new and very yellow reality.

As I stroll through the streets of Skopje in the middle of the day, strong winds come along; like the ones that usually announce a storm – feisty, however unusually warm. Empty streets, hot winds swirling with all the city dust and dry leaves, the land is dry and there is a general grim sensation. It resembles a scene of some dystopian future movie. 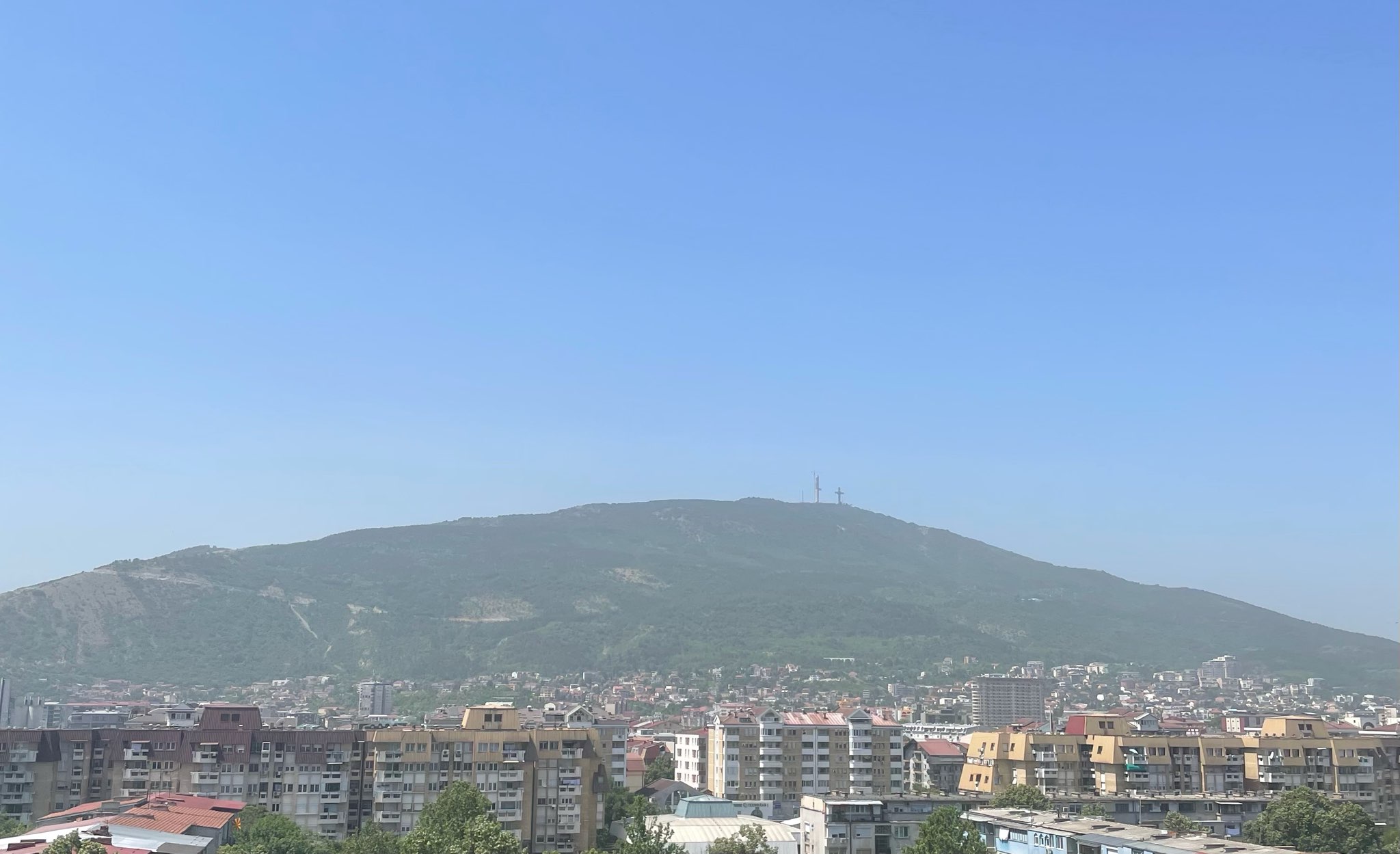 I come home and the news are terrifying  – a series of forest fires all around our small country. One very close to Skopje, in the forests that I often go hiking in. Others dangerously close to small villages, biodiversity spots, fertile grounds. I was shaken up by the cry for help from the elderly citizens of a small village (the only ones left living there) as the fire threatened to enter their village and burn everything they had ever known or built.

Then I read  that North Macedonia had declared a state of emergency from August 5 for the next 30 days. I could not help thinking that, as years go by, the state of emergency is becoming a new state of mind. I was hearing each day of breaking records , while I wished I was following the Olympic Games in Tokyo. However, they referred to unprecedented average daily temperatures, droughts, unexpected rain and flooding, crops destroyed, and heat-stroke related deaths of elderly and vulnerable individuals.

This summer we are experiencing (and still are) a trauma that we all want to leave behind. But it  threatens to come again, very soon.

The above are a collection of texts by several CAN Europe’s staff. We are the ones alarming European policy makers and urging our governments to immediately step up the fight against dangerous man-made climate change. Usually, we do this from behind our desks. But in the last weeks we found ourselves witnessing the catastrophic consequences of climate change. Hence, we felt the urge to share our experiences and call out even more loudly for bolder, faster climate action.