CAN Europe, the Coalition for Energy Savings and the European Renewable Energy Council wrote the following letter to Ministers ahead of the European Council 22nd May 2013 on Energy and Competitiveness.

At your meeting on 22nd of May you will debate the key issue of energy policy and competitiveness.

The Coalition for Energy Savings , the European Renewable Energy Council and the Climate Action Network Europe, representing the key energy savings, renewable energy and climate change mitigation stakeholders in Europe believe that the special European Council session on energy and competitiveness is an opportunity to foster a comprehensive understanding of interlinked issues such as the economic and financial crisis, the climate crisis and the unemployment crisis.

The three organisations call on you to recognise the role of energy efficiency and renewable energy in overcoming these crises by boosting competitiveness, creating jobs and protecting the environment.

The Energy Efficiency Directive is a step in the right direction. It is worth €200 billion net savings per year for households and businesses if it is fully implemented and closes the gap to the EU’s energy efficiency target.

Today the renewable energy sector contributes 1% to the EU`s GDP, avoids using about 130 Mtoe of fossil fuels, has an annual economic activity of more than €130 billion and employs about 1 million people. This will further increase to 2.7 million employees and boost net GDP growth by an additional 0.25% by the end of this decade.

The European Union has the unique opportunity to leap into a new economic era of sustainable growth, jobs and innovation. We believe that Europe´s competitiveness needs to be discussed not by narrowing it to energy prices, but by addressing our economies` energy productivity improvement and renewable energy potential, the urgency of climate mitigation and the tremendous energy trade deficit in general. We need to boost Europe´s competitiveness by tapping its largest indigenous energy resources: energy savings and renewable energy, which will increase energy productivity and reduce our massive €423 billion energy trade deficit. This will allow reinvesting in Europe to create new jobs and secure industrial leadership.

Thanks to dedicated policies, EU businesses, including large to small- and medium-sized enterprises, specialised at an early stage in the supply and deployment of renewable energy and energy efficiency technologies and services which are characterised by high labour and knowledge intensity and learning potential. This helped the EU to establish a first mover advantage.

But international competitors like China, South Korea, the U.S., Japan or emerging economies in Latin America are accelerating and investing heavily with ambitious and dedicated climate and energy policies already in place.

European policy makers need to ensure that the EU is fully equipped for this competition.

Furthermore, early investment in reducing greenhouse gas emissions will reduce both the costs and the risks linked to climate change. As recent World Bank and IMF reports have shown, the current lack of action will have dire social, environmental and economic impacts, many times bigger than the current financial crisis.

We therefore call on you to take a broad and forward looking view on energy policies and competitiveness and to examine the opportunities of investing in renewable energy and tapping the large remaining energy saving potentials as a strategic response to Europe’s structural competitiveness and economic challenges. 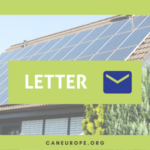