On 20 May, the European Commission published two documents meant to establish the principles according to which renewable hydrogen is produced, otherwise known as the Delegated Acts on RFNBOs. These were long-awaited documents, delayed by a year. A year in which the war in Ukraine started and the Commission sought to find ways to combine the following objectives in its work: reduce dependency on fossil gas imports from Russia, shield consumers from rising energy prices, and
address the climate emergency.

With the energy crisis in full swing in November 2021 and looming rising targets for renewable hydrogen (later materialised in REPowerEU), civil society asked the Commission in a letter to ensure strict criteria were upheld to avoid a new biofuels-like fiasco where watered-down criteria allowed a fossil fuel created hype to become a subsidy-bloated and inefficient market that resulted in disastrous unintended consequences for the environment and climate.

We are now seeing the same happening with hydrogen: the climate benefits hydrogen can offer are being pushed aside and an industry-generated hype is followed instead.
To summarise the basic principles that should be kept in mind when wanting to use hydrogen for the benefit of the climate:

– Hydrogen is not a source of energy and requires large amounts of electricity to be produced: that electricity must be renewable and additional to avoid it cannibalising the much-needed existing renewable electricity sources;

– Hydrogen should be used in a targeted manner, only where electrification or other more efficient energy vectors are not an option.

Yet, with the two delegated acts on RFNBOs, two main issues emerge:

1. a grandfathering clause that allows any hydrogen production facility active before 2027 to benefit from very loose transitional rules for the entirety of its lifetime;

2. a loophole that enables hydrogen producers to avoid additionality obligations by cherrypicking from a list of options that opens the door for on-grid production with little to no correlation with actual renewable electricity generation, as well as double counting of used renewable electricity by choosing the most profitable accounting system on an hourly basis.

We are extremely worried about this development which will result in heavy electricity-dependent electrolysers running as much as possible on an already stressed grid, generating demand for the equivalent of the whole of Germany’s current electricity consumption (500TWh) just to reach the Renewable Energy Directive targets: adding the REPowerEU ambitions nearly doubles this. The increased consumption will either:

– displace demand toward fossil fuels, which will raise the bills for citizens, increase emissions and drive up demand for Russian gas, or;

– lead to new renewable electricity generation capacity paid for through subsidies: this will increase costs for citizens, and;

– create an uneven playing field between Member States where electrolysers will be able to run more easily on the grid than on others, based on some of the options the proposed text allows.

The watering down of the provisions ensuring that renewable hydrogen comes from additional renewable electricity also poses questions in terms of the legality of the documents. These weaker provisions disregard and conflict with essential elements of RED II, suggesting that the Commission exceeded its delegated powers. In our view, the Commission has not met its obligation under the European Climate Law to assess the delegated acts against the EU’s climate targets. If such an assessment were made, it would likely demonstrate that the delegated acts neither help enable the collective achievement of climate neutrality nor prioritise ‘swift and predictable reductions’, as
required by that law.

With the additionality principle maintained without loopholes the Commission has a clear win on all three major objectives it has announced. Strict additionality offers a significant step towards reaching climate goals, leaves the bill for hydrogen to producers and users, not citizens, and significantly
reduces the need for Russian gas.

We therefore ask the Commission to ensure that the strict principle of additionality be upheld in the Delegated Acts. That means removing the grandfathering clause (article 8 of the first Act) and the double-counting clauses (articles A.6 and A.7 of the second acts’ annex), following the consultation period. 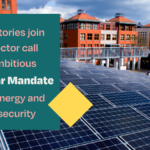